The two satellites were launched into orbit from the Jiuquan Satellite Launch Center in northwest China's Gansu Province. The satellites, Chuangxin 1-03 and Shiyan Satellite 4 were launched on a Long March 2D carrier rocket at 8:15 a.m. Beijing Time, said a Xinhua photographer, who witnessed the whole process. The Chuangxin 1-03, developed by the Chinese Academy of Sciences, will be used to collect and relay water conservancy, hydrological and meteorological data and data for power supply and disaster relief from monitoring stations. The Shiyan Satellite 4 will be used for experiments on space technologies and environment probe. Developed by the Chinese Research Institute of Space Technology, it is the country's fourth technology experiment satellite. The launch was the 151th of China's Long March series of rockets. The Long March-2D is one of the derivations of Long March-2. China started development of modern carrier rockets in 1956, and Long March rockets have become the main carriers for China's satellite launching. (Source: Xinhua News) 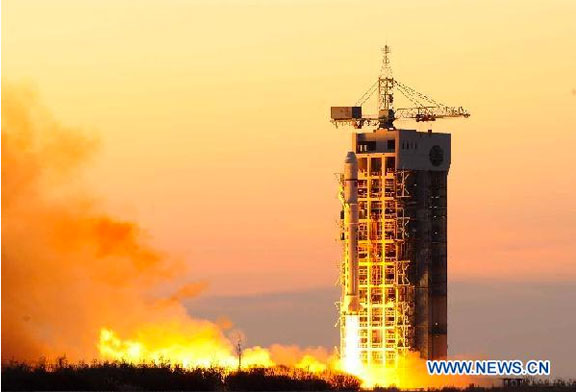