.....first NPP image to be broadcast over California since Direct Broadcast was turned on earlier that day by NASA, the satellite’s operator. “This accomplishment underscores the commitment SeaSpace has towards providing our customers with the highest level of support of any company servicing the Direct Broadcast community,” said Hyong Ossi, President of SeaSpace Corporation. SeaSpace has been working towards NPP acquisition and processing for the past three years. The process included upgrading customer systems with hardware improvements and creating software upgrades to TeraScan®, SeaSpace’s proprietary software. SeaSpace’s process is explained in greater detail on NOAA’s website. 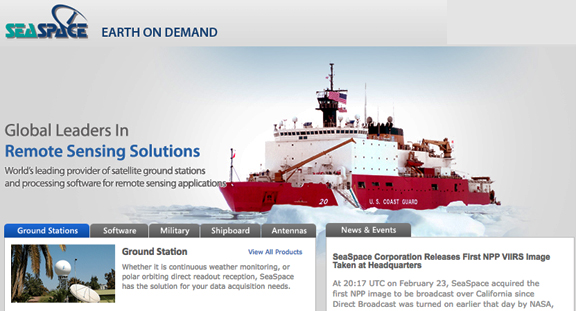 SeaSpace has leveraged its close relationship to NOAA, NASA and the University of Wisconsin’s SSEC to become the first commercial company to provide an NPP solution to customers. TeraScan® for NPP beta version is currently undergoing a rigorous testing procedure, and incorporates both of the most popular packages—CSPP from University of Wisconsin and IPOPP from NASA. The final version of the software is expected to be released on or about April 2nd, 2012. SeaSpace company information link.