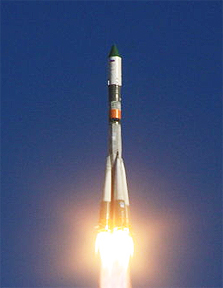 ....has been launched toward the International Space Station (ISS) from the Baikonur space center, Russia's Mission Control said on Thursday. The Soyuz rocket with the Progress M-14M space freighter blasted off at 03:06 a.m. Moscow Time (00:06 GMT) on Thursday. The spacecraft separated from the rocket and entered the orbit a few minutes later. The freighter will deliver more than 2.6 metric tons of supplies to the ISS. The cargo includes fuel, water and food supplies, as well as scientific equipment. The Progress’ docking with the ISS is set for 04:08 Moscow Time on Saturday (01:08 GMT). Progress-family freighters have been the backbone of the Russian space cargo fleet for decades. In addition to their main mission as cargo spacecraft, they are used to adjust the ISS's orbit and conduct scientific experiments. (Source: RIA NOVOSTI)