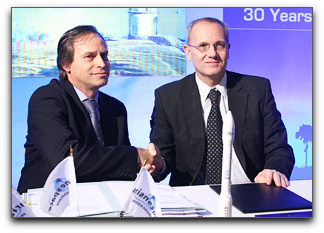 In Rome, Jean-Yves Le Gall, Chairman and CEO of Arianespace, and Markus Bertschi, Launcher Programmes Department Head at the European Space Agency (ESA), signed a contract defining Arianespace's support services for the qualification campaign and combined testing of the Vega light launcher. The signing ceremony was attended by Italian leaders of the Vega project, including Francesco Depasquale, Chief Executive Officer and Managing Director of the company ELV, prime contractor for the Vega launcher.

The contract with ESA defines Arianespace's legal responsibilities and operational services to be provided during the combined testing and the initial Vega integration and launch campaign. The combined tests, to be carried out at the Guiana Space Center in French Guiana starting in April 2010, are based on a launch campaign rehearsal using a representative launcher model. In particular, these tests will be used to validate the ground/launcher interfaces, as well as the procedures for launcher operation and control. The qualification campaign will follow the combined tests.

The initial Vega launches after the qualification flight are part of "VERTA", a development support program set up by ESA. The framework contract for this program, providing for five Vega missions, was signed by Arianespace and ESA on December 22, 2009. Vega will start operation towards the end of 2010, joining the Ariane 5 heavy launcher and the Soyuz medium launcher as part of Arianespace's family of European launchers based at the Guiana Space Center. Vega will primarily be used for scientific and Earth observation missions, and offers payload capacity of 1,500 kg into polar orbit at 700 km altitude. Vega is a European Space Agency program, financed by Italy, France, Spain, Belgium, the Netherlands, Switzerland and Sweden. ELV is jointly owned by Avio (70 percent) and the Italian space agency ASI (30 percent).