[SatNews] Eighty-six days out from its appointment with a comet, NASA's Stardust spacecraft fired its thrusters to help refine its flight path. 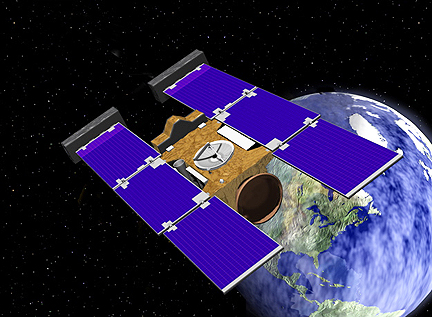 The Stardust-NExT mission will fly past comet Tempel 1 on Feb. 14, 2011. It will perform NASA's second comet flyby within four months. The trajectory correction maneuver, which adjusts the spacecraft's flight path, began at 2:00 p.m. EST (11:00 a.m. PST) on Nov. 20. The Stardust spacecraft's rockets fired for 9 seconds, consumed about 41 grams (1.4 ounces) of fuel and changed the spacecraft's speed by all of 0.33 meters per second (about 0.7 miles per hour). The maneuver was designed to target a point in space 200 kilometers (124 miles) from comet Tempel 1.

Launched on Feb. 7, 1999, Stardust became the first spacecraft in history to collect samples from a comet (comet Wild 2), and return them to Earth for study. While its sample return capsule parachuted to Earth in January 2006, mission controllers were placing the still viable spacecraft on a path that would allow NASA the opportunity to re-use the already-proven flight system if a target of opportunity presented itself. In January 2007, NASA re-christened the mission "Stardust-NExT" (New Exploration of Tempel), and the Stardust team began a four-and-a-half year journey for the spacecraft to comet Tempel 1. This will be the second exploration of Tempel 1 by a spacecraft (Deep Impact). In addition to the high-resolution images of the comet's surface, Stardust-NExT will also measure the composition, size distribution and flux of dust emitted into the coma, and provide important new information on how Jupiter family comets evolve and how they formed 4.6 billion years ago.