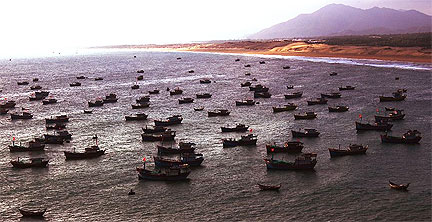 Fishing Boats, Binh Dinh Province, Vietnam
[SatNews] About 3,000 fishing vessels in 28 coastal provinces are to be equipped with satellite monitoring devices in August, under a project of the Ministry of Agriculture and Rural Development aimed at helping them remain in contact with the mainland in the case of an emergency at sea.

"The devices will be vital to helping local authorities make timely search-and-rescue efforts for fishing vessels in distress at sea," said Nguyen Ngoc Phuong, deputy director of the southern province of Kien Giang's Department of Agriculture and Rural Development. "Via satellite, we will also be able to better supervise fishing operations in our province," Phuong said.

News about the device was welcomed by offshore fishermen, many of whom have never had such sophisticated navigation or tracking equipment. "It's useful, since it'll forecast the weather, too," said Khanh Hoa fishing boat owner Dao Van Nghia. "But I also wonder whether I will have to pay for the device. We don't know anything yet about how they will be installed." Fishermen would directly benefit from the project, but many still have no idea of the project's importance, said a spokesman of the port city of Hai Phong City's Department of Agriculture and Rural Development.

Chu Tien Vinh, deputy head of the Directorate of Fisheries, said a budget would be allocated to raising fishermen's awareness about installation of the devices, as well as training courses on how to use and maintain them. Fishing vessels have, so far, maintained contact with the mainland mainly through walkie-talkies or short-wave radios and provincial radio stations. According to the Viet Nam Marine Administration, only 50 per cent of offshore fishing vessels were equipped with high-frequency radios, which do not work well in storms. About 15,500 vessels fish offshore daily out of about 98,000 vessels overall. The lack of communication devices, coupled with untrained and low-skilled crews, is blamed for about 500 accidents at sea every year, resulting in a loss of human life and property, according to the agriculture ministry. Increasingly complex weather and climate change have worsened the situation. In May 2006, nearly 300 fishermen were killed or went missing in Typhoon Chanchu, when local authorities failed to warn vessels about the storm.

The project, funded with 14 million euros (US$20 million) from Collecte Localisation Satellites, an organization under the French Space Agency, will equip 1,500 fishing vessels with a capacity of over 90CV in the south, 1,200 in the central region, and 300 in the north, said Pham Quang Toan, deputy director of the project. The three-year project, which was launched early this month, is scheduled to be completed by late 2013. (Source: Viet Nam News).