[Satnews] The EDRS-A satellite was successfully launched into orbit and the “first section” of the SpaceDataHighway has now been built.

On January 29, 2016, at 23:20 CET the payload EDRS-A on board the communications satellite Eutelsat 9B was launched into  space by a Proton rocket from the Baikonur Cosmodrome. The satellite has already reached its position in geostationary Earth Orbit, that location being 9 degrees East.

EDRS-A is the first element of the European Data Relay System (EDRS). This system will ensure that low-orbiting satellites will be able to send their information to Earth in near-real time. EDRS-A is equipped with a laser communication terminal (LCT) that was developed and manufactured by Tesat-Spacecom GmbH & Co. KG based in Backnang, near Stuttgart, in Germany.

This laser communication terminal contains several optical components and systems manufactured by the Berliner Glas Group. Optical communication allows enormously increasing amounts of data to be made available in a faster, more reliable way to customers. 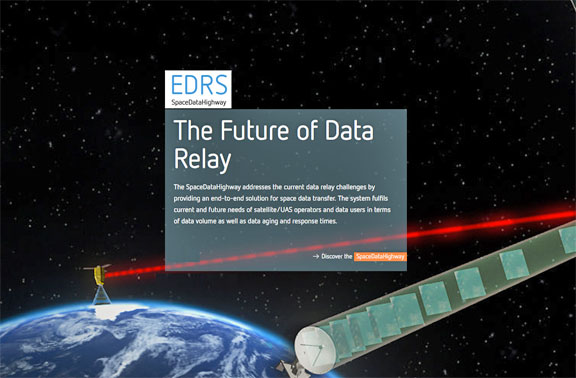 In order to exploit the advantages of data transmission with laser light, very sophisticated technologies have been developed and qualified for use in space. Copernicus, the European Program for monitoring the Earth, will be the first user of the SpaceDataHighway. Copernicus’ satellites Sentinel-1A and Sentinel-2A that already are located in low Earth Orbit are also equipped with laser communication terminals. Sentinel-1A and Sentinel-2A will soon transmit their data to EDRS-A via laser. EDRS-A then will send the information directly to Earth.

The optical components and systems manufactured by the Berliner Glas Group are important elements of the laser communication terminals. The European Data Relay System will enable round-the-clock exchange of large volumes of data between satellites. This will significantly improve Earth observation performance as well as reduce emergency response times.

EDRS-C, the second geostationary satellite of the European Data Relay System, will be launched into orbit on board an Ariane 5 rocket. With EDRS-C, the second section of the SpaceDataHighway will be built. Its orbital position will be 31 degrees East.

Further information is available from the ESA website http://www.edrsspacedatahighway.com.