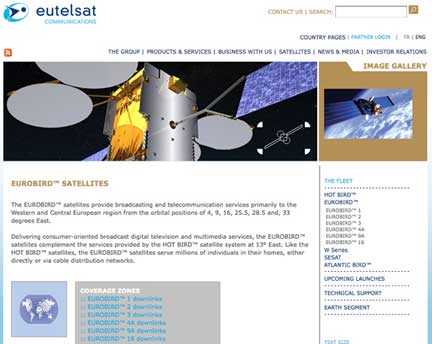 Link to Eutelsat's Eurobird infopage...
[SatBroadcasting] Capacity on the EUROBIRD(tm) 9A satellite operated by Eutelsat Communications (Euronext Paris: ETL) has been selected by Eurosport to transmit the TENNIS US Open in 3D for demonstrations at IFA, the consumer electronics show held in Berlin from September 3rd to the 8th.

The US OPEN in 3D will be available on a dedicated Eurosport 3D signal for an exclusive broadcast at Panasonic's booth at IFA (hall 5.2 a/b). The 3D signals are being transmitted to Panasonic's booth by the EUROBIRD 9A satellite that pioneered regular broadcasting of 3D content in Europe via a permanent channel launched by Eutelsat in 2009. The images are displayed on Panasonic's state-of-the-art Viera 3D Plasma TVs, giving the entire industry and consumers visiting the IFA the unique opportunity to experience world-class sport in immersive high-quality 3D. The event is showcasing the potential of sport as a driver for the consumer 3D market and Panasonic's full end-to-end 3D capabilities, from 3D professional camcorders on court, to new-generation consumer Viera plasma displays.