International search and rescue teams have been able to swiftly relay and co-ordinate information from search sites using Farmside's mobile satellite platform to produce a wireless network, which the company and its satellite partner IPStar are providing free of charge in support of the emergency response. Farmside Chief Executive Richie Smith said that its wireless network was up and running at Latimer Square in the central city within three hours of a request from NZ Fire Service. "In the absence of a traditional phone line infrastructure we were able to very quickly establish a comprehensive communications system that meets the needs of the emergency response teams for reliable, high speed access to email, the web and related services."

IPstar homepage
Across town in Halswell, Farmside's mobile satellite system has underpinned the largest search and rescue event ever undertaken by LandSAR New Zealand. Over a five day period last week, some 500 LandSAR volunteers responded to a request from the Christchurch Emergency Operations Centre to check all residences in west Christchurch and Banks Peninsular. At their headquarters on the Halswell Domain, a portable IPStar satellite system supplied by Farmside was used to provide access to on-line mapping and other vital web-based information services as well as email and VOIP telephone services. The satellite service at the Halswell base camp also supported an internet café which was established so that field team members could access on-line services including Skype when they returned each evening, enabling the volunteers drawn from throughout the country to maintain contact with their homes and workplaces. 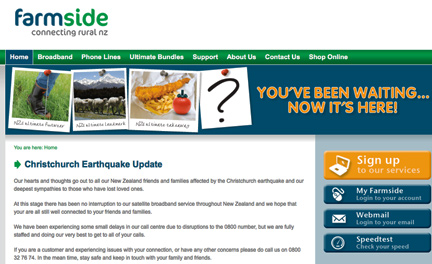 Farmside homepage
"Our ability to access the internet independent of any land based services such as the cellular network or land lines was crucial to our operation," said Alan Thompson, LandSAR IPStar Project Manager. "LandSAR was able to establish internet services at Halswell in a matter of minutes without any need to connect into local services which were already under enormous pressure. The portable satellite system operated faultlessly throughout the operation, delivering continuous service at a time when assured communications support was absolutely vital."

C-COM iNetVu infopage
The New Zealand Army and the New Zealand Fire Service have previously made use of Farmside's mobile satellite high-speed broadband and phone connections during the response to both the Canterbury earthquake in September 2010 and the Pike River mine tragedy. To help local businesses get back on their feet post-quake, the company has just announced a Canterbury business package offering an interim satellite alternative for broadband and internet phone access. Farmside's mobile auto acquisition satellite antenna system, iNetVu delivers secure, high-speed Internet access from virtually anywhere on the planet. With the push of a button, the iNetVu automatically unfolds, locates the appropriate satellite, locks on to a signal, and establishes a connection —all within minutes of deployment, and all without relying on traditional terrestrial infrastructure. When combined with IPStar satellite broadband, the C-COM iNetVu platform is able to deliver a high speed Internet connection to virtually any location in New Zealand. With download speeds of up to 4Mbps and upload speeds of 2Mbps users can quickly enable a full suite of communications links quickly and at times or locations where no other form of telecommunications can be delivered.