[SatNews] a cutting-edge approach to designing a low-cost receiver that enables police departments, fire brigades, emergency medical services, and other public entities to make use of the Galileo PRS system.

The winner of the European Satellite Navigation Competition (ESNC) 2014 was Airbus Defence & Space, which won over the jury of experts from around the world with its receiver for the Galileo Public Regulated Service (PRS).

The award-winners Dr. Wolfgang Kogler and Dr. Jan Wendel from Airbus Defence & Space have taken a cutting-edge approach to designing a low-cost receiver that enables police departments, fire brigades, emergency medical services, and other public entities to make use of the Galileo PRS system. Its core innovation involves the development of a special network architecture that combines the receiver with an assistance server. The concept accounts for all the required security aspects and significantly reduces costs and the complexity of user receivers, thus facilitating broader use of PRS in the realm of public security. 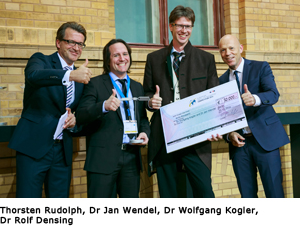 In addition to the 20,000 euro grand prize, this inventive design took home Bavaria's regional prize and the ESNC's special PRS prize, which was awarded by Germany's Federal Ministry of Transport and Digital Infrastructure (BMVI) and Federal Ministry for Economic Affairs and Energy (BMWi).

"This special prize reflects our effort to further examine possibilities for the use of PRS applications," said Head of the BMVI's Digital Society Dr. Tobias Miethaner in his opening address at the awards ceremony. "I am delighted to see that the ESNC is already providing an important impetus to the promotion and development of innovative applications of the future Galileo PRS in its first year."

Over the past decade, the ESNC has brought forth numerous new applications in the field of satellite navigation. The 2014 edition was shaped in particular by the imminent launch of the first Galileo services, with more than 40 percent of the 434 submissions received from more than 40 countries seeking to employ Galileo/EGNOS in their own products and services.

"Thanks to our international network, we're in an excellent position to take advantage of Galileo's operational launch," said Thorsten Rudolph, managing director of Anwendungszentrum GmbH Oberpfaffenhofen, which initiated and continues to organize the ESNC. "We believe that the ESNC's function as a leading innovation framework in its field will grant it an equally important role in Europe's new satellite navigation system."

Along with the overall winner, the some 240 experts in the ESNC's network selected more than 30 other winners in the competition's regional and special-prize challenges. Under the patronage of Germany's Federal Minister of Transport, prizes worth a total of around one million euros were presented at the awards ceremony. The winners illustrated the fundamental importance of robust, reliable, and secure time and positioning signals for Europe's digital society through innovations in areas such as transport, health, and the environment.

Meanwhile, this year's awards ceremony was held in parallel with the Satellite Masters Conference for the first time, which gave the winners the chance to present their ideas to a global audience and discuss innovations in space-based technologies and services.

This year's competition was supported by the European Commission and the European Patent Office. Along with the ESNC's 25 regions around the world, the following partners sponsored prizes in 2014: the European GNSS Agency (GSA); the European Space Agency (ESA); the German Aerospace Center (DLR); and, for the first time, the German Federal Ministry of Transport and Digital Infrastructure (BMVI) in cooperation with the Federal Ministry for Economic Affairs and Energy (BMWi). Prototype submissions were accepted as entrants for the GNSS Living Lab Prize. The University Challenge, which is geared toward students and research assistants, was also held again this year.