Aviation and space technology company MT Aerospace AG, a subsidiary of the technology group OHB SE, has officially opened the new production facilities for the Ariane 6 at their Augsburg site.

MT Aerospace has built a new hall in Augsburg with a floor area of around 2,500 square meters, retooled a further production hall and digitized its entire development and production operations with the financial support of the European Space Agency ESA. State-of-the-art welding systems, machine-to-machine communications as well as modernized drilling and riveting robots ensure more efficient and cheaper production processes. 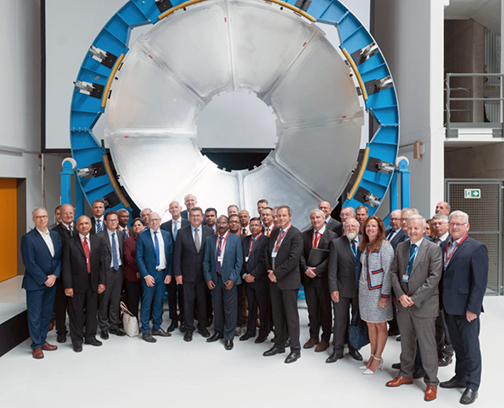 Guests of honor from politics and the industry attending the inauguration of the production facilities for the new European launch vehicle Ariane 6.

With an industrial contribution of a good 10 percent, MT Aerospace is playing a crucial role in the development and industrialization of the Ariane 6 launcher system. At the heart of the productivity gains and this quantum technological leap is the large FSW system. FSW is short for “friction stir welding”. Installed at the beginning of 2018, the system for welding light metals is one of a kind anywhere in the world. The new process permits efficient light-weight engineering, permitting considerable weight savings, something which is a crucial factor in aviation and aerospace engineering.

The ceremony was attended by the Bavarian State Minister of Economics, Energy and Technology, Franz Josef Pschierer, who, in his speech, said, “Bavaria is a premium location for the space industry. MT Aerospace is impressively demonstrating that with its adoption of Industry 4.0 practices and its focus on digitization it will remain competitive in the future, generating growth and preserving jobs. In this way, it is making a key contribution to strengthening Bavaria’s role as one of the leading European high-tech research and production centers. The “Bavaria One” space program will be setting new accents as space is a key technology for the state. As it is, the space industry employs 27,000 people in Bavaria.

MT Aerospace CEO Hans J. Steininger said with the company's leap into the Industry 4.0 era, the firm is tripling productivity and playing a material role in driving forward technological innovations and the competitiveness of the future Ariane 6 launch vehicle,.

Marco R. Fuchs, CEO of OHB SE, added that the global launcher market is highly competitive. This makes it all the more important for OHB SE to join forces with the space agencies and industrial partners to make sure that the Ariane 6 program is a success.”