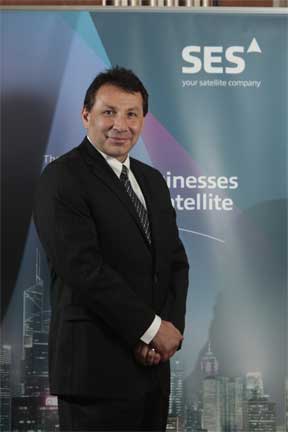 SES S.A. [Euronext Paris and Luxembourg Stock Exchange: SESG] announced its continued push for growth in Asia-Pacific at the CASBAA Convention 2011 with the investment of US$400 million. At a media briefing session jointly hosted by SES and CASBAA, Glen Tindall, Vice President of Sales for SES in Asia-Pacific shared key drivers for the company’s growth in the region:

“At this year’s CASBAA Convention 2011, we look forward to engaging with existing and prospective customers in new conversations around pay-TV and free-TV growth, new ways for broadcasters and TV networks to deliver their content to their local audience or around the globe, and global insights on the technologies consumers are likely to expect moving forward.” SES’ momentum in Asia SES is committed to extending its coverage of Asia-Pacific’s growth economies while continuing to provide established markets in the region with services of the highest level. More than 20 million households in Asia-Pacific and India are connected via SES satellites.

The company has plans to launch eight new satellites by 2014 to grow its global satellite fleet and its business. The SES-8 satellite scheduled for launch in 2013 will provide expansion capacity for the rapidly growing markets in South Asia and Indochina. In 2010, SES completed the acquisition of ProtoStar II to provide incremental capacity in South Asia and Asia-Pacific. The satellite was subsequently re-named SES-7 and today provides a range of Direct-to-Home (DTH) and enterprise services to the region. 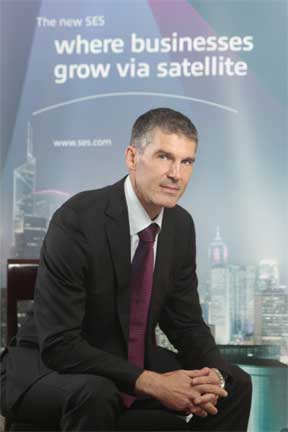 Glen Tindall, Vice President, Sales, Asia-Pacific
The two projects represent a combined investment of US$400 million in the Asia-Pacific region. The fleet extension program will increase SES’ global fleet capacity by 23 per cent in comparison to year-end 2010. Approximately 85 per cent of this new satellite capacity will be dedicated to the highly dynamic emerging markets such as Asia, Latin America, Middle East and Africa, enabling customers and users alike to deploy market relevant services and networks. “Asia is not made up of one market, but many, and SES’ extensive service offering, dedicated satellite capacity and solid financial track record puts us in a unique position to deliver on the needs of our customers in the region, and to be the partner of choice for broadcasters, governments and businesses,” said Glen Tindall.

As a leader in direct-to-home (DTH) and High Definition (HD) television, SES today transmits 700 TV and radio channels in Asia-Pacific and India and 5,900 around the world, more than 1,000 of them in HD. In fact, SES has seen strong success in high potential emerging markets such as Philippines, Thailand, and Vietnam where DTH connectivity is still at the early stage but growing, and HDTV is gaining momentum.