Thales Alenia Space,the  joint-venture between Thales and Leonardo, and Arianespace have signed a launch contract for two COSMO-SkyMed Second-Generation (CSG) satellites manufactured for the Italian Space Agency (ASI) and the Italian Ministry of Defense.

The signing ceremony was attended by French President Emmanuel Macron and Paolo Gentiloni, the President of the Council of Ministers of the Italian Republic, at the Prefecture du Rhône, in Lyon, France, on the occasion of the 34th French-Italian summit. 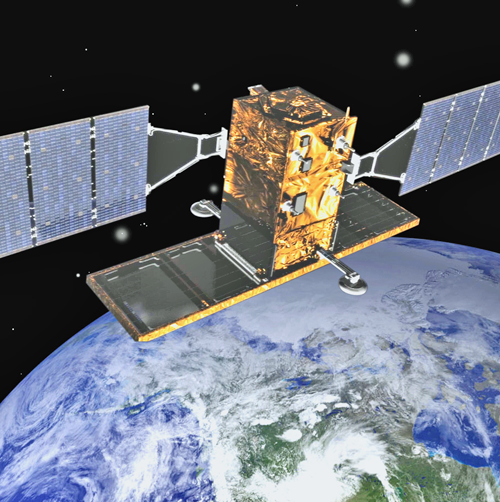 The original COSMO-SkyMed satellite. Image is courtesy of Leonardo.

The COSMO-SkyMed Second-Generation satellites are Earth Observation (EO) spacecraft featuring state-of-the-art technologies and engineering solutions, further bolstering Italian leadership in this sector. They also will foster the expansion of international strategic partnerships, such as those already set up in France and Poland. The two satellites will be launched as from 2018 by Soyuz and Vega C launchers from the Guiana Space Center in French Guiana.

This second-generation system, including its ground segment, will set a new performance standard for space-based radar observation systems in terms of precision, image quality and the flexibility of user services. It is a dual (civil/military) system, designed to address the requirements of both commercial and government customers, as well as the scientific community. The satellites are equipped with synthetic aperture radar (SAR), capable of observations under any weather or light conditions, day or night.

Built by Thales Alenia Space in Italy using the PRIMA platform, the COSMO-SkyMed Second-Generation satellites will each weigh approximately 2,200 kg. at launch, and will be positioned in Sun-synchronous orbit at an altitude of 619 kilometers.

Following the contract signature, Arianespace Chief Executive Officer Stéphane Israël said that Arianespace is honored by this expression of confidence from its long-standing partner, Thales Alenia Space, on behalf of the Italian space agency and Ministry of Defense. With this new launch contract, the second of the year awarded by the Italian government, Arianespace proudly continues its contribution to Italy’s space program. The Italian government institutions’ choice of Soyuz and Vega C to launch the second-generation COSMO-SkyMed satellites clearly shows that Arianespace’s current and future launch services perfectly meet the needs of Europe, its Member-States and its space agencies.

In addition, Arianespace and ELV/AVIO announced the signature of a contract for Arianespace to order 10 Vega and Vega C launchers from the Italian manufacturer.

The signing ceremony was attended by French President Emmanuel Macron and Paolo Gentiloni, the President of the Council of Ministers of the Italian Republic, at the Prefecture du Rhône, in Lyon, France, on the occasion of the 34th French-Italian summit. This contract was signed by Giulio Ranzo, CEO of AVIO, signatory on behalf of ELV; and Luce Fabreguettes, Arianespace’s Executive Vice President, Missions, Operations and Purchasing. 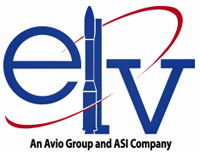 These 10 additional Vega and Vega C launchers will enter service starting in 2019, from the Guiana Space Center, Europe’s Spaceport in French Guiana (South America). Following the successes of the 10 Vega missions to date, with 10 more launches already in the Arianespace order book, today’s contract confirms the long-term viability of the Vega light launcher, now established as the leading launch vehicle in its class. Vega is especially well suited to the launch of scientific or Earth observation satellites into low or Sun-synchronous orbits. It is fully available for European government and institutional missions, and offers equally high performance for other customers. 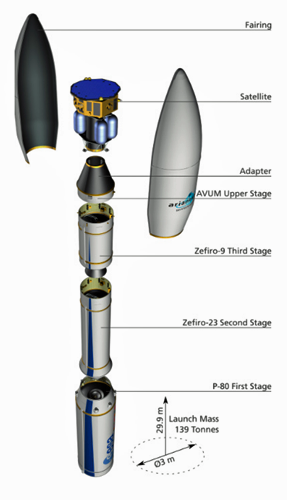 An exploded view of the Vega launcher.

The higher-performance Vega C version will offer increased payload weight and volume, enabling it to carry out an even broader range of missions, from nano-satellites to larger optical and radar observation satellites — making it even more competitive.

Three of the first Vega C launchers have already been assigned to missions:

Vega is part of the Arianespace launcher family, alongside the Ariane 5 heavy launcher and the Soyuz medium launcher, operated from the Guiana Space Center. The Vega launch system was developed through an ESA program financed by Italy, France, Spain, Belgium, the Netherlands, Switzerland and Sweden.

ELV, a public-private joint venture owned by Avio (70%) and the Italian space agency (30%) based in Colleferro, Italy, is the industrial prime contractor for Vega. The company is now responsible for all launcher preparations up to liftoff. Vega C will be operated under the same arrangements for its planned service entry in 2019.

Arianespace retains full responsibilities for customer relations, as well as for the final countdown operations and the launch decision.