[SatNews] Breaking news items for those who have an interest in the various technologies and products that play a significant role within satellite broadcasting's various market segments....

ATG Broadcast homepage
ATG Broadcast has announced a new addition to its management team with the appointment of Clive Northen as Chief Operating Officer. He is based at the company’s administrative and engineering centre in Letchworth, U.K., reporting to Managing Director Graham Day. Clive Northen commenced his broadcast industry career in 1994 on the staff of Worldwide Television News at its headquarters in the Interchange Building, Camden. He was appointed Bureaux Equipment Manager when WTN was acquired by the Associated Press. In 2003 he joined Charter Broadcast as Client Manager to develop its rental and flyaway-system activity, progressing to Presteigne as Operations Manager where he was involved in coordinating the company’s relocation from New Malden to Gatwick. He joins ATG Broadcast following five years with Gearhouse Broadcast, latterly as General Manager. 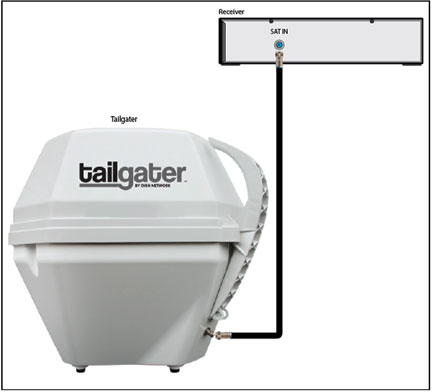 DISH homepage
DISH Network L.L.C. (NASDAQ: DISH) has announced that the new Tailgater remote viewing satellite dish has been named an International CES Innovations 2012 Design and Engineering Awards Honoree. The Tailgater is a lightweight, portable satellite dish ideal for watching TV while tailgating, camping, in the RV or at other outdoor activities. Products entered in this prestigious program are judged by a pre-eminent panel of independent industrial designers, engineers and members of the media to honor outstanding design and engineering in cutting edge consumer electronics products across 32 categories. The Tailgater is the lowest-priced portable satellite dish available and the easiest to use. Weighing in at just 10 pounds, the Tailgater automatically locates satellite positions so there is no need for manual adjustment. The Tailgater easily connects to a small, sleek DISH STB and TV. Within minutes, customers are able to enjoy their favorite channels in HD. The prestigious Innovations Design and Engineering Awards are sponsored by the Consumer Electronics Association (CEA)®, the producer of the International CES, the world's largest consumer technology tradeshow, and has been recognizing achievements in product design and engineering since 1976. Tailgater by DISH will be displayed at the 2012 International CES from Jan. 10-13, 2012, in Las Vegas. Honorees will also be displayed at CES Unveiled: the official press event of the International CES from 4-7 p.m. on Sunday, Jan. 8, 2012, in the Venetian Ballroom at the Las Vegas Venetian Resort Hotel Casino.

Sinclair Broadcast Group, Inc. (Nasdaq: SBGI) has entered into a definitive agreement to purchase the broadcast assets of Freedom Communications ("Freedom") for $385.0 million. Freedom owns and operates eight stations in seven markets, reaching 2.63 percent of the U.S. TV households. The transaction is subject to Freedom's shareholder approval which must be obtained by November 8, 2011, approval by the Federal Communications Commission ("FCC"), and customary antitrust clearance. Following receipt of antitrust approval of the transaction, which is expected to occur within thirty days, and prior to closing of the acquisition, Sinclair will operate the stations pursuant to a Local Marketing Agreement. The companies anticipate closing and funding of the acquisition to occur late in the first quarter/early in the second quarter of 2012. Upon closing, the Company expects to finance the $385.0 million purchase price, less a $38.5 million deposit payable upon Freedom's shareholder approval, either through a bank loan or by accessing the capital markets. Further details at at this infopage. 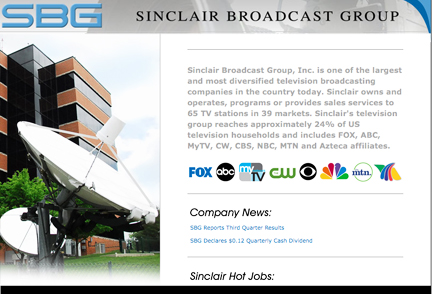 
XenData has released the XenData SX-10 appliance, which manages a robotic LTO tape library or stand-alone LTO-5 tape drives and creates a cost effective digital video archive that is ideal for video production and post production applications. The SX-10 runs XenData6 Server software on a Windows 7 platform and scales to 75 TB of near-line LTO. It is available in six standard configurations, from a single stand-alone LTO-5 tape drive to a 50 slot LTO tape library with up to two internal LTO-5 drives. The LTO cartridges written using the SX-10 are self-describing and may be transferred between systems running XenData6 Server and XenData6 Workstation software. The SX-10 connects to a network, as illustrated below, and files are archived to and restored from LTO just as files are transferred to and from a standard network share. The system supports the CIFS/SMB network protocol and FTP. 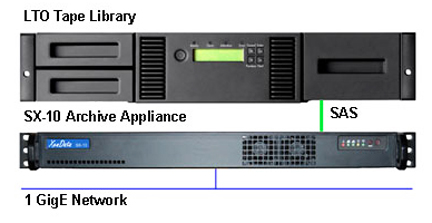