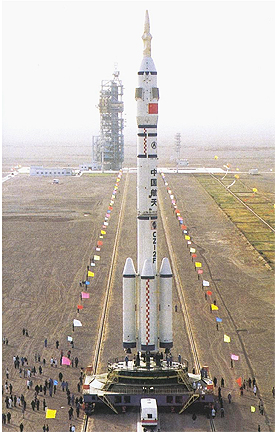 China's Jiuquan Satellite Launch Center
[SatNews] According to Xinhua, China will launch 20 carrier rockets with 25 satellites into space by the end of the year...

Such an undertaking would make China the world's second country, after Russia, with the number of space launches. "This year, we are supposed to launch 20 rockets and 25 satellites, a number that would put China in second place after Russia," Yuan Jiajun, deputy general director of China Aerospace and Technology Corp. told Xinhua. In 2010, Beijing launched 15 rockets with 20 satellites, what is equal to the United States and Russia, the current world's leaders in space launches. "It is an arduous process and a great challenge for us to cope with the high intensity of satellite launching," Xinhua quoted Yuan as saying. "It requires us to be equipped with sufficient capacity." The most of the rockets will be blasted off from the Jiuquan Satellite Launch Center in the northwest Gobi desert, Yuan said.