XCOR Aerospace... They Will Come If You Build It (Spacecraft)

[SatNews] XCOR Aerospace will establish an East Coast U.S. operational base in Florida and, as market demand dictates, establish...

...a manufacturing and assembly center for XCOR Lynx Mark II suborbital reusable launch vehicles as well. Should the full business plan of XCOR be realized, the Company will also commence assembly and factory test of Lynx production models—designed Lynx Mark II—on Florida’s Space Coast, starting with Tail #3. Direct job creation through late 2018 is estimated at just over 150 in number.

Plans call for XCOR to commence initial operations from a Florida location in 2014 when they plan on bringing the Lynx Mark I prototype for demonstration and pathfinder flights. This will be followed by the basing of a Lynx Mark II production vehicle in Florida, and eventually production of Lynx vehicles and other XCOR products should market demand materialize and the emerging commercial space industry maintain its current momentum. 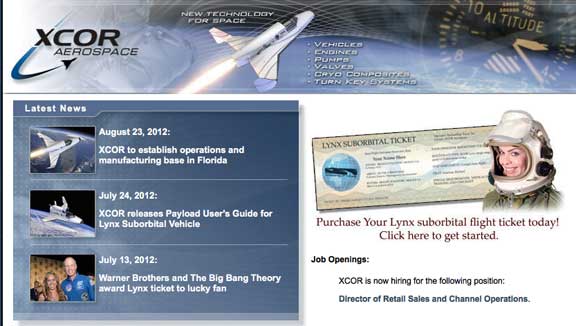