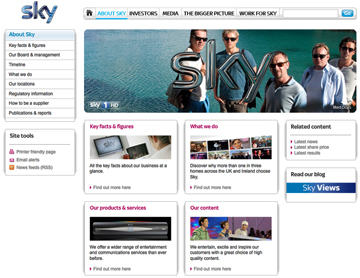 Infolink to Sky
[SatNews] Millions of pounds are being invested...

Sky and Atlantic Productions will join forces to create a brand new production company, Colossus Productions, to develop original 3D programming for both U.K. and international audiences. The home-grown shows will be showcased on Sky 3D, Europe’s first dedicated 3D TV channel, before being distributed to other platforms and countries. Sky has enjoyed a long-standing relationship with Atlantic Productions and has a number of existing commissions in production, including a 3D series on plants currently being filmed at Kew Gardens, presented by Sir David Attenborough, and The Bachelor King 3D, a theatrical-release feature documentary, also with David Attenborough, that looks at the lives of penguins in South Georgia. Anthony Geffen, CEO and Creative Director at Atlantic Productions, will also serve as Creative Director of Colossus Productions. Atlantic Productions remains fully independent, and will continue to focus on producing innovative, high quality 2D programmes for leading broadcasters in the U.K. and around the world. Future 3D projects, whether for Sky or other broadcasters, will be produced by Colossus Productions.

This multi-million pound deal demonstrates Sky’s continuing support for U.K. production, particularly in 3D, and will ensure Sky continues to offer its customers the best choice of high-quality home-grown 3D content. The co-investment with Atlantic Productions follows on from Sky’s commitment earlier this year to increase the amount it invests each year in original UK programming by 50 percent to £600 million a year by 2014. Since launching in October 2010 with live 3D coverage of the Ryder Cup, Sky 3D has broadcast more than 120 live sports events in 3D, the world 3D TV premieres of Avatar, Alice in Wonderland and the Toy Story trilogy, and a host of U.K. originated factual, arts and music programming. Sky 3D is available at no extra charge to all Sky TV customers who take Sky World and have a Sky+HD subscription.