[SatNews] NovelSat has announced that the company will start demo'ing NovelSat NS4, the next generation successor to the industry’s spectral efficiency waveform leader, NovelSat NS3. 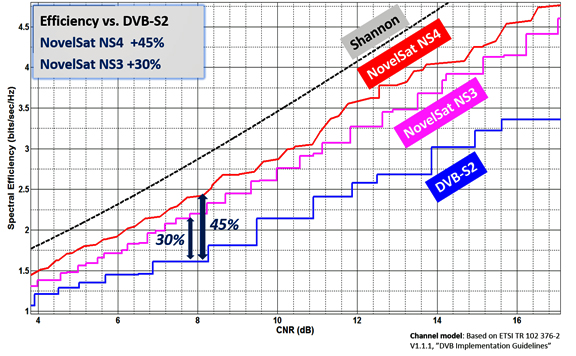 NovelSat has invited satellite industry leaders to witness demonstrations of NovelSat NS4, promising up to 45 percent higher spectral efficiency compared with DVB-S2, the industry leading satellite transmission standard. What’s more, as opposed to some extensions to the standard, such as DVBâ€‘S2X, NovelSat can deliver the efficiency of NovelSat NS4 without deploying any new hardware. The new NovelSat NS4 waveform, like all NovelSat features and options, is a software upgradable option that will be able to be implemented over the air (OTA) on all NovelSat satellite devices.

In 2011, when NovelSat announced that NovelSat NS3 would provide 25 percent higher spectral efficiency compared with DVB-S2, industry experts and competitors doubted that it was possible. With NovelSat NS4, NovelSat again surpasses all industry efficiency expectations with a 45% hardware-free efficiency boost.

“NovelSat NS4 is the culmination of efforts on the part of some of the most talented engineers I have ever had the privilege of working with,” said Itzik Wulkan, NovelSat CEO. “As testing and fine tuning move forward, we expect even better efficiency from NovelSat NS4 when we release it later this year.”

NovelSat has invited broadcasters, satellite communications providers, users and integrators to schedule demonstrations of NovelSat NS4 at the Satellite 2015 Show, March 16-19 in Washington DC and at the NAB Show, April 13-16 in Las Vegas. NovelSat plans to release NovelSat NS4 for commercial use during the third quarter of 2015. NovelSat NS4 will be available as a software upgrade option with all NovelSat modems, modulators and demodulators.