Because the Smart Backplane is designed as a commercial-off-the-shelf (COTS) solution, it lowers the cost of space flight while speeding development time and significantly reducing program risk. 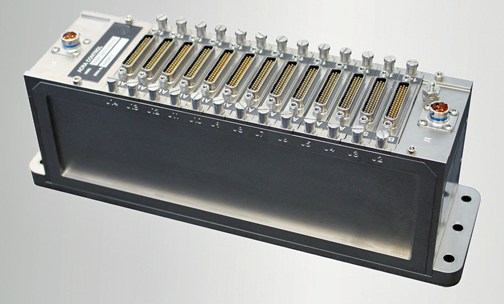 A fundamental threat for electronics systems deployed in radiation-intensive environments is the destructive power of Single Event Latch-Ups (SEL). An SEL is the inadvertent creation of a low-impedance path on an integrated circuit and is caused by ionizing radiation. The SEL triggers a high current which disrupts proper functioning of the circuit, possibly even leading to its destruction due to overcurrent. A fast power cycle is required to correct this situation and prevent permanent damage occurring in the device. Until now, this threat has required the use of costly radiation-hardened electronics hardware. The Smart Backplane is the central component to the first data acquisition system designed for space applications that provides radiation protection in a manner that enables the use of 100+ cost-effective standard COTS I/O modules.

The company’s breakthrough Smart Backplane technology provides system designers with an intelligent multi-slot backplane that protects its critical data acquisition electronics with a unique radiation tolerant architecture.  If a potential SEL is detected on any of the chassis’ COTS modules, the Smart Backplane resets the operation of that module only. Typically the affected module is back operating again within a few seconds, eliminating the potential harmful effects of ionizing radiation, which can result in electronic circuit malfunction. Smart Backplane also helps to reduce the platform’s overall power requirements because it enables any of the chassis modules to be commanded individually to switch on or off during different phases of a spacecraft mission. For maximum reliability, the backplane also provides continuous health status information to the on-board mission computer as well as a watch-dogging capability (e.g., it monitors whether an SEL is detected repeatedly in the same module, or if the unit temperature exceeds a pre-defined value).