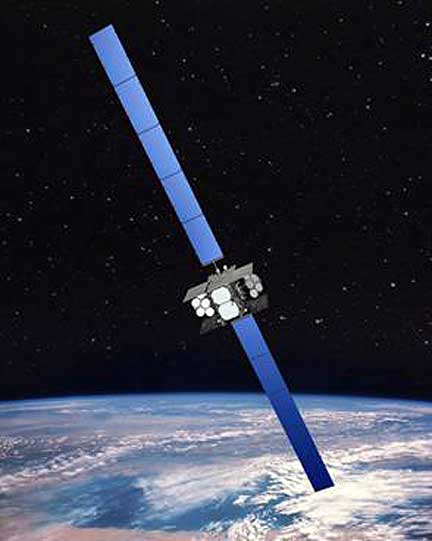 Artistic rendition of a WGS satellite, courtesy of Boeing.
[SatNews] Cobham has been awarded a $65 million contract to supply electronic systems to...

...Boeing’s Wideband Global SATCOM satellite program. The contract funds production on three satellite flight sets, with additional options for three more sets. Cobham Defense Electronics in Lowell, Massachusetts, will supply 1,000 modules for the phased array antennas on each satellite. The modules are made up of a complex power amplifier, beamformer and receive amplifier modules. The modules allow the satellite to transmit and receive communications.

According to Boeing, the mission of the Wideband Global SATCOM (WGS) is to provide broadband communications connectivity for U.S. and allied warfighters around the world. WGS is the highest-capacity military communications system in the U.S. Department of Defense arsenal, providing a quantum leap in communications capability for the U.S. military. Long lead time work on the contract started in 2010, and production began in early 2012. Work is expected to be finished in 2013.