NASA... And The Craft Comes Tumbling Down (Satellite) 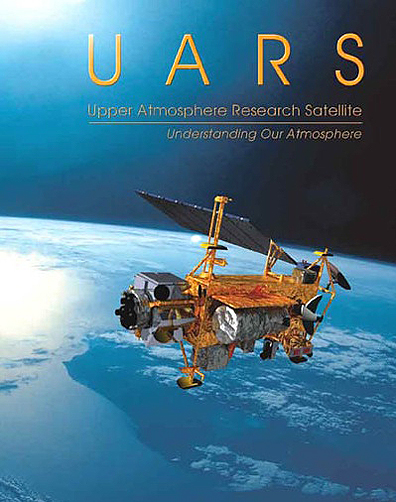 [SatNews] From a spacecraft that has delivered scientific data to one that may deposit debris... NASA is reporting that a defunct 7-ton research satellite is heading for Earth and is due to re-enter the atmosphere — with a potential to rain debris onto the Earth's surface, NASA reports. The Upper Atmosphere Research Satellite (UARS) is expected by late September or early October.

"The risk to public safety or property is extremely small, and safety is NASA's top priority," the space agency wrote in an advisory. "Since the beginning of the Space Age in the late-1950s, there have been no confirmed reports of an injury resulting from re-entering space objects. Nor is there a record of significant property damage resulting from a satellite re-entry." The satellite has been in orbit for six years in what NASA calls a "productive scientific life." Although it will break into pieces during re-entry, not all of it will burn up in the sky, according to a report. NASA has said it is hard to predict the exact date of the re-entry as such is highly dependent on solar flux and the spacecraft's orientation as the orbit decays. The space agency will be posting weekly and then daily updates as the craft approaches the Earth.

As of Sept. 8, 2011, the orbit of UARS was 152 miles by 171 miles (245 km by 275 km), with an inclination of 57 degrees. As the satellite's orbit is inclined 57 degrees to the equator, any surviving components of UARS will land within a zone between 57 degrees north latitude and 57 degrees south latitude, NASA reported. Although it is difficult to predict where the debris will fall the space agency predicts that its footprint will be 500 miles long. UARS was a $750 million mission deployed from the shuttle Discovery in 1991 to study the Earth's atmosphere and its interactions with the sun. It measure important ozone depletion related to climate change. According to NASA, reading from UARS gave evidence that Chorine in the atmosphere is at the root of the polar ozone hole