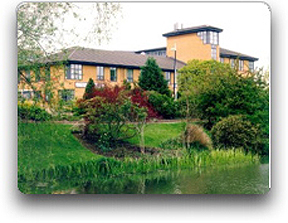 In a bucolic, and unlikely setting Surrey Satellite Technology Ltd (SSTL) and EADS-Astrium have announced the creation of a new "Space Engineering Innovation Hub" in conjunction with the University of Surrey in Guildford, UK. This new venture will combine academic research and commercial exploitation to develop technologies that "change the economics of space" by providing rapid-response, low-cost, highly capable space missions.

The first steps are underway to establish the new Space Engineering Innovation Hub, foremost of which is the creation of a prestigious new Research Chair in Space Engineering at the Surrey Space Centre.  The new Chair announced by the University of Surrey will be jointly sponsored by the Royal Academy of Engineering and SSTL.

The UK Space Minister, Lord Drayson, commented: "Surrey is a shining example of innovation in the UK space sector, leading the world in pioneering new and more affordable approaches to space and its applications.  I applaud the imagination and commitment of the Academy and SSTL in their investment in the future of Britain in space."

Professor Sir Martin Sweeting, Director of the Surrey Space Centre, commented: "The Royal Academy's support for this important development of Surrey's academic research in space engineering is greatly appreciated and, together with the industrial support from SSTL, will enable Surrey to be even more innovative in changing the economics of space."

Dr. Matt Perkins, CEO of SSTL, added: "SSTL thrives on innovation and close links with the leading academic institution in space engineering and small satellites is essential for our continued growth and supplying the best value and capability products to our customers."

Robert Barrett of the Royal Academy of Engineering stated: "The Academy strongly supports the effective combination of academia and industry through our prestigious Research Chairs Scheme — this new professorship at the Surrey Space Centre is an example of the Academy's commitment to linking industry with academia."

SSTL has built and launched 32 small satellites and has eight more under construction carrying Earth observation, navigation, communications and space science payloads. The Surrey Space Centre and SSTL are currently working on an exciting UK-led small satellite mission to the Moon in 2012.