The SpaceX Crew Dragon approaching ISS (l) and the target zone for birthing. Dragon becomes the first commercially built and operated spacecraft designed for crew. Photos are courtesy of NASA.

This was a major test for the SpaceX program, which aims to give NASA a second option for sending astronauts to space rather than relying upon the Russian space program and the, paying a ticket price of some $82 million per person for transportation to the ISS.

The capsule was only carrying a life-sized dummy named Ripley, so named after Sigourney Weaver's character in the film Alien.

A second test of the Dragon capsule is expected to occur in July. 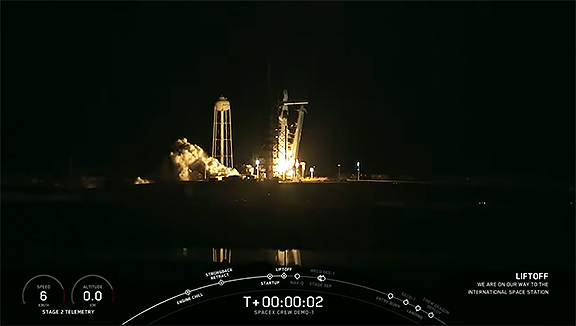 On 2:49 a.m. EST on March 2, SpaceX launched Crew Dragon’s first demonstration mission from Launch Complex 39A (LC-39A) at NASA’s Kennedy Space Center in Florida. Extensive modifications have been made to LC-39A by the company, including removal of the existing, rotating service structure and the installation of a new access arm from which the crew boarded the spacecraft.

This test flight without crew on board the spacecraft is intended to demonstrate SpaceX’s capabilities to safely and reliably fly astronauts to and from the International Space Station as part of NASA’s Commercial Crew Program.

Following stage separation, SpaceX landed Falcon 9’s first stage on the “Of Course I Still Love You” droneship, which was stationed in the Atlantic Ocean.

Crew Dragon, designed from the beginning to be one of the safest human space vehicles ever built, benefits from the flight heritage of the current iteration of Dragon, which restored the United States’ capability to deliver and return significant amounts of cargot o and from the International Space Station. Dragon has completed 16 missions to and from the orbiting laboratory. 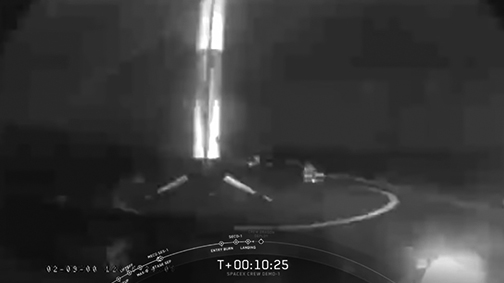 The Falcon 9's first stage landing on the "Of Course I Still Love You” drone ship stationed in the Atlantic Ocean.  SpaceX's screen capture launch video.

To support human spaceflight, Crew Dragon features an environmental control and life support system, which provides a comfortable and safe environment for crew members.The spacecraft is equipped with a highly reliable launch escape system that is capable of carrying crew to safety at any point during ascent, or in the unlikely event of an anomaly on the pad.

While the crew can take manual control of the spacecraft if necessary, Crew Dragon missions will autonomously dock and undock with the International Space Station. After undocking from the space station and reentering Earth’s atmosphere, Crew Dragon will use an enhanced parachute system to splashdown in the Atlantic Ocean.

Crew Dragon is transporting roughly 400 pounds of crew supplies and equipment to the International Space Station. In addition, the spacecraft will be carrying mass simulators and an anthropomorphic test device (ATD) that is fitted with sensors around the head, neck, and spine to gather data ahead of SpaceX’s second demonstration mission with NASA astronauts onboard the spacecraft.

For the first time in history, a commercially-built and operated American crew spacecraft and rocket, which launched from American soil, is on its way to the International Space Station.

The SpaceX Crew Dragon spacecraft lifted off at 2:49 a.m. EST Saturday on the company’s Falcon 9 rocket from Launch Complex 39A at NASA’s Kennedy Space Center in Florida.

Known as Demo-1, SpaceX’s inaugural flight with NASA’s Commercial Crew Program is an important uncrewed mission designed to test the end-to-end capabilities of the new system. It brings the nation one-step closer to the return of human launches to the space station from the United States for the first time since 2011 – the last space shuttle mission. Teams still have work to do after this flight to prepare the spacecraft to fly astronauts. The best way to advance the system design was to fly this spacecraft and uncover any other areas or integrated flight changes that might be required.

The program demonstrates NASA’s commitment to investing in commercial companies through public-private partnerships and builds on the success of American companies, including SpaceX, already delivering cargo to the space station. Demo-1 is a critical step for NASA and SpaceX to demonstrate the ability to safely fly missions with NASA astronauts to the orbital laboratory.

SpaceX controlled the launch of the Falcon 9 rocket from Kennedy’s Launch Control Center Firing Room 4, the former space shuttle control room, which SpaceX has leased as its primary launch control center. As Crew Dragon ascended into space, SpaceX commanded the Crew Dragon spacecraft from its mission control center in Hawthorne, California. NASA teams will monitor space station operations throughout the flight from Mission Control Center at the agency’s Johnson Space Center in Houston.

The SpaceX Crew Dragon spacecraft is on its way to the space station for a 6:05 a.m. Sunday, March 3 docking to the low-Earth orbit destination. Live coverage of the rendezvous and docking will air on NASA Television and the agency’s website beginning at 3:30 a.m. Coverage will resume at 8:30 a.m. with the hatch opening, followed at 10:45 a.m. with a crew welcoming ceremony.

Teams in the space station mission center at Johnson will monitor station crew members’ opening of the spacecraft hatch, entering Crew Dragon and unpacking the capsule.

NASA Administrator Jim Bridenstine said that this successful launch marks a new chapter in American excellence, getting the nation closer to once again flying American astronauts on American rockets from American soil. NASA congratulates the SpaceX and NASA teams for this major milestone in the nation’s space history. This first launch of a space system designed for humans, and built and operated by a commercial company through a public-private partnership, is a revolutionary step on the path to get humans to the Moon, Mars and beyond.

Elon Musk, CEO and lead designer at SpaceX, added that the company expresses great appreciation for NASA. SpaceX would not be here without NASA, without the incredible work that was done before SpaceX even started and without the support after SpaceX did start.

Steve Stich, launch manager and deputy manager of NASA’s Commercial Crew Program, said the agency is watching history being made with the launch of the SpaceX Demo-1 mission. SpaceX and NASA teams have been working together for years and now both are side-by-side in control rooms across the country for launch, on-orbit operations and, eventually, splashdown of the Crew Dragon right here off Florida’s coast.

Mission Objectives
All the launch pad and vehicle hardware, and the launch day operations, were conducted in preparation for the next flight with crew aboard, including the control teams and ground crews. The mission and testing continues once the Falcon 9 lifts off the pad.

During the spacecraft’s approach, on-orbit demonstrations will include rendezvous activities from a distance of up to 2.5 miles (4 kilometers), known as far field, and activities within one mile (1.6 kilometers), known as near field. As the spacecraft approaches the space station, it will demonstrate its automated control and maneuvering capabilities by reversing course and backing away from the station before the final docking sequence.

The docking phase, as well as the return and recovery of Crew Dragon, include many first-time events that cannot be totally modeled on the ground and, thus, are critical to understanding the design and systems ability to support crew flights. Previous cargo Dragon vehicles have been attached to the space station after capture by the station’s robotic arm. The Crew Dragon will approach to dock using new sensor systems, new propulsion systems and the new international docking mechanism to attach to the station’s Harmony module forward port, fitted with a new international docking adapter. Astronauts installed the adapter during a spacewalk in August 2016, following its delivery to the station in the trunk of a SpaceX Dragon spacecraft on its ninth commercial resupply services mission.

For Demo-1, Crew Dragon is carrying more than 400 pounds of crew supplies and equipment to the space station and will return some critical research samples to Earth. A lifelike test device named Ripley also will travel on the Crew Dragon, outfitted with sensors to provide data on potential effects on humans traveling in Crew Dragon.

For operational missions, Crew Dragon will be able to launch as many as four crew members and carry more than 220 pounds of cargo, enabling the expansion of the crew members, increasing the time dedicated to research in the unique microgravity environment, and returning more science back to Earth.

The Crew Dragon is designed to stay docked to station for up to 210 days, although the Crew Dragon used for this flight test will not have that capability. This spacecraft will remain docked to the space station only five days, departing Friday, March 8. After undocking from the station, Crew Dragon will begin its descent to Earth. Live coverage of the undocking will air on NASA Television and the agency’s website beginning at 2:00 a.m., with de-orbit and landing coverage resuming at 7:30 a.m.

Additional spacecraft mission objectives include a safe departure from the station, followed by a de-orbit burn and parachute deployment to slow the spacecraft before splashdown in the Atlantic Ocean, off the Florida Space Coast. SpaceX’s recovery ship, Go Searcher, will retrieve Crew Dragon and transport it back to port. Teams will be closely monitoring the parachute system and entry control system operation, which have been changed from cargo Dragons to provide higher reliability for crew flights.

NASA and SpaceX will use data from Demo-1, along with planned upgrades and additional qualification testing, to further prepare for Demo-2, the crewed flight test that will carry NASA astronauts Bob Behnken and Doug Hurley to the International Space Station. NASA will validate the performance of SpaceX’s systems before putting crew on board for the Demo-2 flight, currently targeted for July.

NASA’s Commercial Crew Program is working with Boeing and SpaceX to design, build, test and operate safe, reliable and cost-effective human transportation systems to low-Earth orbit. Both companies are focused on test missions, including abort system demonstrations and crew flight tests, ahead of regularly flying crew missions to the space station. Both companies’ crewed flights will be the first times in history NASA has sent astronauts to space on systems owned, built, tested and operated by private companies.