[SatNews] Another successful launch for China...

China launched on Tuesday the Shenzhou 8 unmanned spacecraft in the country’s first ever attempt to dock two space vehicles together, Chinese media reported. A Long March-2F rocket carrying Shenzhou 8 lifted off from the Jiuquan Space Center in the Gobi Desert at 05:58 Beijing time (21:58 GMT on Monday). The spacecraft will dock with the Tiangong-1 lab module, which was launched in September, paving the way for China to become a major space power capable of operating a permanent space station in the future. Shenzhou 8 is expected to dock with Tiangong-1 in two days and orbit the Earth in tandem for 12 days. The spacecraft will then separate and attempt a re-docking. Finally, Shenzhou 8 will detach and head back to Earth. The 8.5-tone Tiangong-1 module will remain in the 340-km orbit for two years, operating mainly in an unmanned regime, although it is capable of carrying up to three astronauts for 20 days. If the current mission goes well, China may send two manned missions to the module in 2012 as part of an ambitious project to start building a 60-ton space station by about 2020. 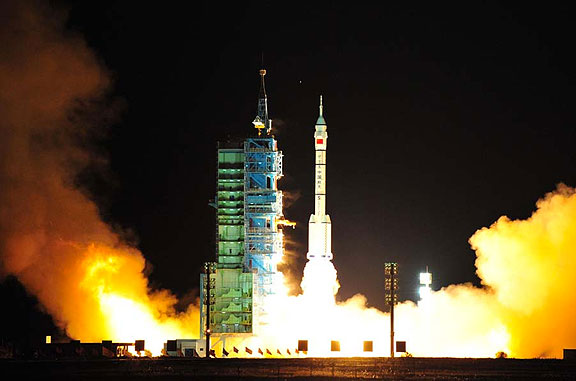 The launch of Shenzhou 8 via a Long March launch vehicle. Photo courtesy of China Daily