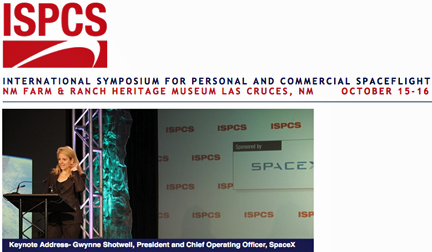 [SatNews] Only at ISPCS (International Symposium for Personal and Commercial Spaceflight!)—the 2013 ISPCS keynote session will be presented by Jon Gertner, Editor at Large for Fast Company magazine and author of "The Idea Factory: Bell Labs and the Great Age of American Innovation."

Jon discusses what he uncovered about the men, the research, and their disruptive technologies, which nurtured revolutionary innovation platforms upon which industries were built. The foundations for the space industry including transistors, lasers, the ideas behind digital communications, communications satellites, UNIX, and C Programming, all originated there. Bell Labs is also a great ecosystem to examine how a true public-private partnership, like the commercialization of the International Space Station, was cultivated.

ISPCS spent two years getting Jon to ISPCS. Why? Because providing unique, high-value content on our industry is what we do at ISPCS. And spending your time well is the event's main consideration as we plan the agenda for ISPCS 2014. Join us on October 15-16 for the 10th anniversary ISPCS.

For more information on ISPCS 2014, or to register, head over to http://www.ispcs.com/