[SatNews] “As Albert Einstein once said: ‘We can't solve problems using the same kind of thinking we used creating them’.” 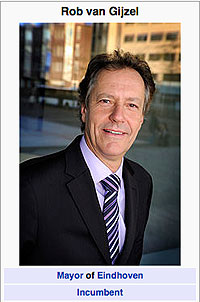 "Our world is in transition: socially, culturally, politically and environmentally. We need new answers to worldwide questions like safety, healthy aging, sustainable energy, mobility, food and nutrition,” says Mayor van Gijzel adding that, “ In Brainport Eindhoven Region in the Netherlands we strongly believe that collaboration, open innovation, and combining creativity with technological findings are the values that will lead us to new solutions. As Albert Einstein once said: ‘We can't solve problems using the same kind of thinking we used creating them’.

The ICF is a connector, it is of most importance to strengthen the bond between intelligent communities throughout the world. Collaboration between the current and the future members of the ICF Foundation will have a positive spin-off, not only for the regions themselves but for the rest of the world."

The ICF Foundation is the nonprofit association of the Intelligent Community Forum. Its members are the communities honored by the Forum’s international awards program as Intelligent Communities, which use information and communications technology to grow prosperous, inclusive, sustainable economies. The global network created by the ICFF communities boosts their economic competitiveness, social health and cultural strength through close and effective collaboration.

“On behalf of the ICF and the entire Alumni of Intelligent Communities around the world as well as the ICFF membership, I would like to thank City of Waterloo Mayor Brenda Halloran for her inaugural Chairmanship of the ICFF over the past two years.

I would also like to welcome the incoming Chairman, Eindhoven Mayor Rob van Gijzel, who championed Brainport’s rise to the Intelligent Community of the Year in 2011. I am certain with Mayor Gijzel’s leadership, ICFF will move to the next level as it continues to gain members and raise greater awareness of the importance of the Intelligent Community movement in helping to create the best communities for its citizens the world over,” said ICF Co-founder John Jung.

The ICF is also pleased to announce that past Chairs and Presidents will stay on with the Foundation and hold a special emeritus status. Mayor Halloran will be the first person to join the Foundation’s Honorary Board.