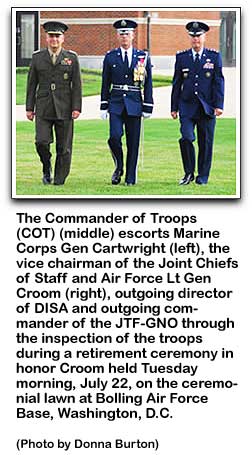 Air Force Lt. Gen. Charles E. Croom Jr. retired from the Air Force and stepped down as director of the Defense Information Systems Agency and as commander of the Joint Task Force-Global Network Operations during a July 22nd ceremony at Bolling Air Force Base, Washington, D.C. Navy RADM Elizabeth Hight, DISA vice director, will serve as acting director and acting JTF-GNO commander until a replacement for Croom is selected and confirmed by the U.S. Senate. Croom, who served in the Air Force for more than 35 years, became director of DISA in July of 2005. Among his many accomplishments, he is credited with establishing an agency-wide, acquisition strategy of adopting capabilities and services before buying, and buying capabilities and services before creating, commonly referred to as the "ABCs." Croom arrived at DISA after serving as the director for Information, Services, and Integration in the Office of Warfighting Integration, Office of the Secretary of the Air Force. Hight was the Navy's director of net-centric warfare before joining DISA in 2005. She joined the Navy in 1977.
Topical Tags :
Military
Executive Moves
Regional Tags :
North America