Two Canadian satellites are in danger of being damaged or destroyed because they’re passing through massive clouds of space junk caused by a recent collision between a Russian and an American satellite. 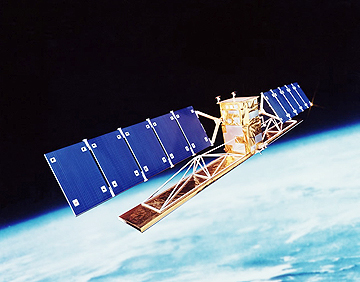 The two Canadian satellites, RADARSAT-1 and RADARSAT-2, orbit the Earth 14 times each day, heading east to west. Meanwhile, the clusters of space junk travel north to south. Scientists say they could be on a collision course. “There is a very high risk for the two satellites,” said Robert Saint-Jean, manager of satellites at the Canadian Space Agency.

More than 500 large pieces of debris — many larger than a tennis ball — as well as millions of smaller pieces that can’t be tracked, were created when communications satellites Iridium 33 and Cosmos 2551 smashed into each other on Feb. 10. Pieces of the destroyed satellites were scattered as low as 500 kilometres and as high as 2,000 kilometres above the Earth’s surface, said Saint-Jean. “Even very small things produce very large results,” said Ken Tapping, an astronomer with the Canadian Hertzberg Institute of Astrophysics. “At those speeds, a fleck of paint is enough to blast a hole through a windshield.” Current technology can only monitor space debris larger than 10 centimetres in diameter, he said, so the untraceable fragments are the most concerning. Tapping said very little can be done about existing debris. “We’ve been absolutely irresponsible about the way we’ve been using space,” he said. “The best we can hope for is (all the debris) will re-enter the atmosphere in the next 50 to 100 years.”

The RADARSATS — which cost Ottawa almost $1 billion to build — collect data used to monitor ocean, land and ice development and then help agencies manage resources and protect the environment. According to international law, the country that launched the satellite that created space debris is responsible to pay for any damages the litter causes, said Ram Jakhu, an international law expert at Montreal’s McGill University. But it’s up to the country with the damaged satellite to prove where the debris came from. This is problematic as Canada does not collect its own data on space junk. Canada relies mostly on the U.S. for information about when and how to move satellites to avoid debris, so “Canada is at the mercy of other states,” he said, adding, “there should be an international consortium of monitoring.” Stratcom, a branch of the U.S. air force, monitors space debris. In case of collisions, it tells North American Aerospace Defense Command (NORAD), which then passes the information on to the Canadian Space Agency.