....SuperDraco, a powerful new engine that will play a critical role in the company’s efforts to change the future of human spaceflight. “SuperDraco engines represent the best of cutting edge technology,” said Elon Musk, SpaceX CEO and Chief Technology Officer. “These engines will power a revolutionary launch escape system that will make Dragon the safest spacecraft in history and enable it to land propulsively on Earth or another planet with pinpoint accuracy.”

The SuperDraco is an advanced version of the Draco engines currently used by SpaceX’s Dragon spacecraft to maneuver on orbit and during reentry. As part of SpaceX’s state-of-the-art launch escape system, eight SuperDraco engines built into the side walls of the Dragon spacecraft will produce as much as 120,000 pounds of axial thrust to carry astronauts to safety should an emergency occur during launch. NASA’s Commercial Crew Program awarded SpaceX $75 million in April of last year to start work developing the escape system in order to prepare the Dragon spacecraft to carry astronauts. Less than nine months later, SpaceX engineers have designed, built and tested the engine.

In a series of recent tests conducted at the company’s Rocket Development Facility in McGregor, Texas, the SuperDraco sustained full duration, full thrust firing as well as a series of deep throttling demonstrations. SpaceX’s launch escape system has many advantages over past systems. It is inherently safer because it is not jettisoned like all other  escape systems. This distinction provides astronauts with the unprecedented ability to escape from danger at any point during the launch,  not just in the first few minutes. The eight SuperDracos provide redundancy, so that even if one engine fails an escape can still be carried  out successfully. 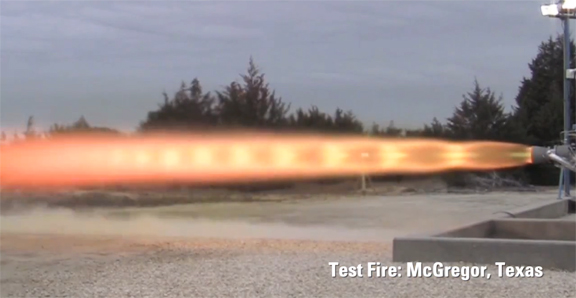 SuperDracos can also be restarted multiple times, if necessary, and the engines will have the ability to deep throttle, providing astronauts with precise control and enormous power. In addition, as a part of a recoverable Dragon spacecraft, the engines can be used repeatedly, helping to advance SpaceX’s long-term goal of making spacecraft more like airplanes, which can be flown again and again with minimal maintenance between flights. SpaceX company information here.