SES WORLD SKIES, an operating unit of SES S.A. (Paris:SESG) (LuxX:SESG), announced the Company has reached an agreement with the Andean Community of Nations (CAN) regarding the long-term use of the 67 degrees West orbital position. The 67 degrees West orbital position offers an extensive Ku-band satellite frequency range and excellent viewing angles for coverage of the Americas and the Caribbean. 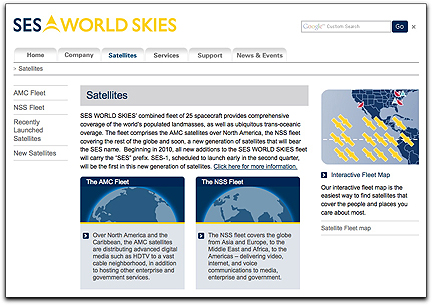 Company satellite page...
The Andean Community consists of Bolivia, Colombia, Ecuador and Peru. The organization was established in 1997 to foster the political, economic, and social integration of its member countries. One of its long-standing objectives has been the development of the 67 degrees West geostationary orbital position with the International Telecommunications Union (ITU) for the benefit of the Andean people.

Rob Bednarek, President and CEO of SES WORLD SKIES, said: “This agreement allows us to assist the Andean Community in developing this orbital slot, and offers an additional opportunity to SES WORLD SKIES to efficiently serve Latin America and the Caribbean with state-of-the-art satellite solutions for television distribution, broadband connectivity and government services. We look forward to a mutually beneficial relationship with the Andean Community and to developing 67 degrees West into a prime orbital neighborhood for the region.”