Thales Alenia Space has delivered the Eurobot Ground Prototype (EGP) to the European Space Agency (ESA), following successful testing and qualification. ESA launched the Eurobot program in 2002 to support the International Space Station's Extra-Vehicular Activities (EVA), as well as future manned space missions. Developed by Thales Alenia Space Italia as prime contractor, the Eurobot programme kicked off with a design study for a robotic EVA assistant, capable of aiding spaceborne crews and thus reducing the time spent by astronauts on extravehicular activities. ESA moved to a new phase of the Eurobot program in 2008 by financing the Eurobot Ground Prototype (EGP), designed to expand the robot’s capabilities beyond the scope of the ISS, and encompass possible manned missions in the Solar System. The new robotic system is designed to operate on the surface of a moon or planet, preparing for the astronauts' landing and supporting them afterwards. 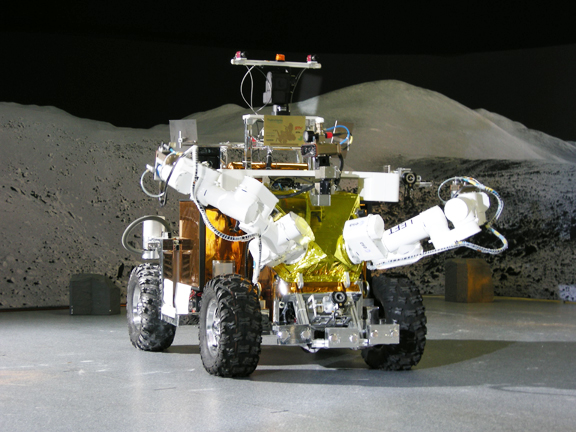 Since July of 2008, Thales Alenia Space has led the team of European companies working on the EGP project. The EGP’s architecture is based on the "centaur" concept, which includes a mobile platform (EGP-Rover) transporting a manlike robot (EGP-Robot) that has two articulated arms, with force and torque sensors and vision systems. This makes it an autonomous system, capable of traveling on its own over the surface of the Moon or Mars and building the necessary infrastructures for the construction of a base. The system can be controlled from Earth (when the time lag due to the distance between the planets is acceptable), from a control station on the planet or in direct response to astronaut voice commands. The current prototype is capable of transporting 150 kilograms, including a space-suited astronaut. It has four driven wheels and is highly maneuverable, with its back wheels steerable over 120 degrees. Subcontractors on the EGP project include Selex Galileo, a Finmeccanica company.

The EGP demonstrated exceptional performance during the final qualification stages before delivery to the client. In particular, the EGP successfully performed two missions:
NASA recently confirmed that collaborative robotics for astronauts is a technology worth investing in for future space exploration missions, and suggested that it could be validated on the International Space Station, perhaps via a joint international initiative. Thales Alenia Space has built up extensive experience in the Eurobot programme, making the company a leading candidate for any future joint projects between the European and American space agencies. As the supplier of 55 percent of the pressurised volume in the non-Russian segment of the ISS, Thales Alenia Space is a major player in manned space programmes. The company is also heavily involved in laboratories and other modules for manned space programmes, as well as for services, and is developing the technologies needed for the atmospheric reentry of manned spacecraft.