Spaceopal... Getting Galileo Up To Speed (SatNav)

[SatNews] Spaceopal, the 50:50 joint venture between Telespazio (Finmeccanica/Thales) and DLR GfR (a German Space Agency company) have signed a contract with the European Space Agency acting on behalf of the European Union, relating to operations that will bring European satellite navigation system Galileo to full operational capacity.

The signing of this contract, worth 194 million euros and valid, initially, until 2014, allows Telespazio to play a leading role in Europe‘s most important industrial strategic program. Spaceopal will be responsible for supplying in-orbit (IOT) services, the operational and logistics services necessary to manage and control the Galileo constellation and mission, and the launch and early orbit phase (LEOP) services. All these activities will be performed from the initial In-orbit validation (IOV) phase (first four operational satellites) until the system reaches Full Operational Capability (FOC). The current contract covers all operations up to the launch of the constellation’s first 18 satellites. 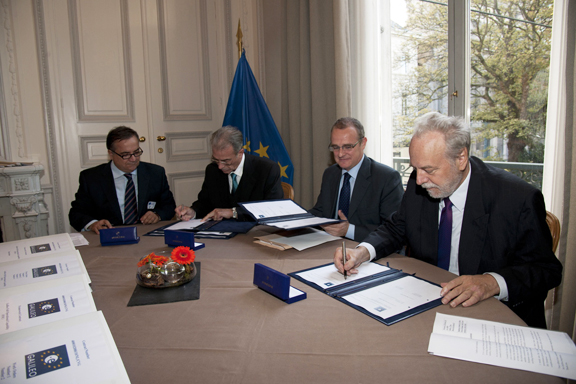 
These services will be provided by Spaceopal through two Galileo Control Centers (GCCs) — in Italy, at Telespazio's Control Center in Fucino, and in Germany, at the Space Center of the DLR in Oberpfaffenhofen near Munich. The two centers will be connected to a global network of remote stations for satellite control and for mission signal distribution. Spaceopal will lead an industrial partnership that, in addition to Telespazio and DLR shareholders, will also include Astrium (ASV), CNES, ESA/ESOC, RSS, SES, T-Systems and Vitrociset.