SENER Aeroespacial Successfully Delivers the AOCS for the Euclid Satellite

SENER Aeroespacial has successfully completed the delivery of the nominal version of the Attitude and Orbit Control System (AOCS) for the Euclid satellite, for which, as main contractor of this AOCS, SENER Aeroespacial leads the design, development and verification of this system. 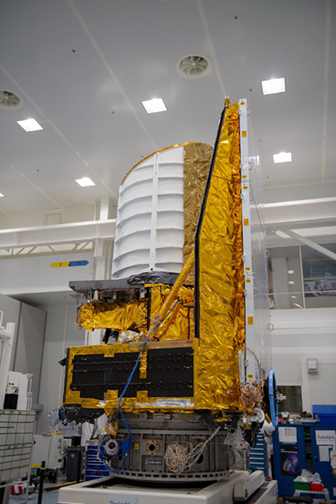 The structural and thermal model
of the Euclid satellite.

Image is courtesy of SENER.

This version, called v1, covers all the nominal functionalities and has allowed the company to demonstrate and test the outstanding subsystem's performance, achieving the most demanding pointing stability obtained to date in a space science mission. That achieved pointing stability is better than 25 milliarcseconds (1σ) and is maintained for 11 minutes, which in macroscopic terms is equivalent to maintaining pointing within a single euro coin from a distance of 100 km. 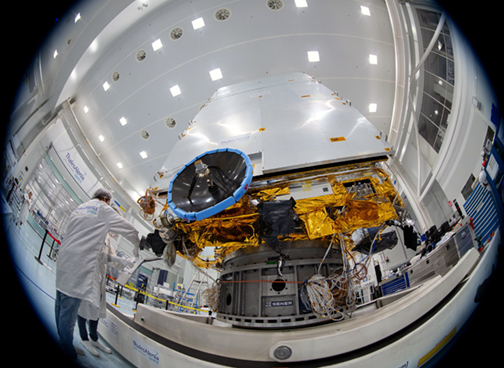 Among the different state-of-the-art sensors integrated in the system is the high-performance inertial unit, a guidance sensor that is integrated inside the telescope, as well as a star sensor with multiple, optical heads. In regard to the actuators, the system includes five reaction wheels that are subject to a complex start/stop operation cycle, which is necessary to avoid disturbances, whether those disturbances are generated by the wheels themselves or by other mechanisms in the telescope; this type and number of reaction wheels star-stop operations has never been used before and has required a dedicated qualification process. In combination with the reaction wheels, the system uses multiple micro-cold-gas thrusters, with high-precision amplitude modulation, to keep the very precise pointing while the wheels are motionless.

Salvador Llorente, Project Manager at SENER of this system, said that in the Euclid mission, the company has the overall responsibility for the complete AOCS system, from the preliminary design to on-orbit acceptance, including the detailed design, production, integration, verification and on-ground and in-flight validation. SENER Aeroespacial is proud to have delivered this version to Thales Alenia Space Turin, the mission's integrator and prime contractor, after having demonstrated and tested full compliance of the most demanding AOCS specifications. Prior to the delivery of this version, the company has also delivered representative units of all of the AOCS equipment, enabling its joint application and testing at the satellite avionics bench at Thales. Meanwhile, most of the flight units for integration into the satellite have already been delivered and version 2 (the final one) is expected to be completed in the first half of 2020.

Euclid is a cosmology mission of the European Space Agency (ESA) that is dedicated to the study of the nature of the dark universe, meaning both dark matter and dark energy. To do this, the satellite features a 1.2 meter diameter telescope with which it can make observations in the visible and near infrared spectra through the use of wide bandwidth and spectroscopy. Euclid's goal is to investigate the evolution of cosmic structures by measuring shapes and redshift of the light from distant galaxies. Among the issues it seeks to resolve are how the universe was created and why it is expanding at an increasing speed, rather than decreasing, as one would expect, given its current, known mass. The dark energy is expected to be the cause of this effect and Euclid will analyze this through the impact it has on the shapes and locations of galaxies.

Euclid is scheduled to be launched in 2022 from Kourou (French Guiana) on a Soyuz rocket and to be placed into a high-amplitude Lissajous/Halo orbit around the Sun-Earth L2 Lagrange point, 1.5 million km. away from Earth. In the Euclid AOCS, SENER Aeroespacial is main contractor and includes Airbus Defence and Space Netherlands as the main partner, while seven additional, direct subcontractors in Europe and the U.S. have taken part with various contributions.