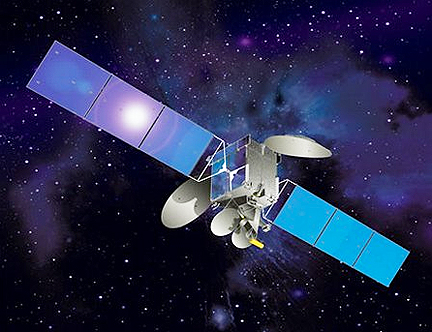 AsiaSat-5, image courtesy of Space Systems/Loral
....to provide satellite services from the orbital location of 120 degrees East. Under the agreement, the two companies will place an interim satellite at the 120 degrees East orbital slot, while a new satellite contracted with Space Systems/Loral will be launched in early 2014. AsiaSat and THAICOM will provide services on their portions of the new satellite under the name AsiaSat 6 and Thaicom 7, respectively. This cooperation will preserve the 120 degrees East orbital slot for Thailand and will provide additional broadcast, telecommunications and broadband services across the Asia-Pacific region.

“Our strategic cooperation with THAICOM allows AsiaSat to expand our inventory and to meet growing demand from the region,” said William Wade, President and Chief Executive Officer of AsiaSat.

“We are pleased to establish this new partnership with AsiaSat to cooperate on a satellite project that will preserve the orbital slot for Thailand at 120 degrees East, and fulfill the fast growing demand for quality satellite capacity from customers in our country and across the region,” said Suphajee Suthumpun, Chief Executive Officer of Thaicom. AsiaSat 6/Thaicom 7 will have 28 high-power C-band transponders serving Asia and Australia.