A brand new sports stadium in Detroit is going to use ViaLite RF over fiber links in their satellite communications for broadcasting live events — the Little Caesars Arena is set to replace the Joe Louis Arena and become the new home of the Detroit Red Wings ice hockey team.

Fiber optic links were selected by Diversified, the company providing the stadium’s audiovisual technology, as the distance between the antenna and broadcast control room would have meant the use of coaxial cable, which was  costly and ineffective. Using ViaLite’s RF over fiber links in this installation reduced the overall cost of implementation, while increasing reliability, performance and ease of installation. 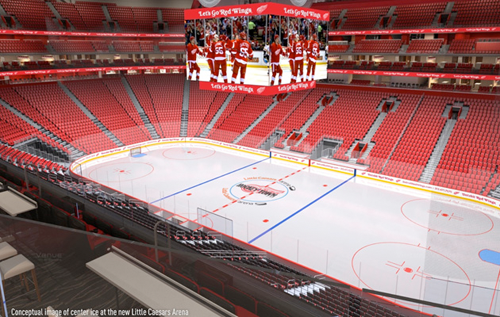 Conceptual image of center ice at the under construction Little Ceasar's Arena in Detroit, Michigan.

The eight-story, multi-purpose stadium, previously named the Detroit Events Center (working name), is being built as a bowl, with the stadium's floor 12 meters below street level. The venue has projected seating capacities of 20,000 for ice hockey and 21,000 for basketball and will become home to the Detroit Red Wings of the National Hockey League (NHL) and the Detroit Pistons of the National Basketball Association (NBA). New Jersey-based Diversified specializes in the design and integration of audiovisual technology for complex and scalable broadcast, corporate communications and digital signage networks.

ViaLite Communications is a division of Pulse Power and Measurement Ltd (PPM). PPM was founded in 1994 and has three additional divisions: PPM Power, PPM Test and PPM Systems.