ATK... Liberty Is At Hand (Spacecraft) 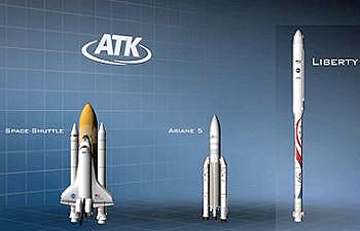 ...transportation system, including the spacecraft, abort system, launch vehicle, and ground and mission operations, designed from inception to meet NASA's human-rating requirements with a potential for the first test flight in 2014 and Liberty crewed flight in 2015. The company also announced Lockheed Martin (NYSE: LMT) will provide support to the ATK and Astrium Liberty team as a major subcontractor on the project.

Liberty's test flights are expected to begin in 2014, with a crewed mission anticipated in late 2015. The current schedule will support crewed missions for NASA and other potential customers by 2016, with a price-per-seat that is projected to be lower than the cost on the Russian Soyuz rocket. Liberty's approach is to bring together flight-proven elements designed from inception to meet NASA's human-rating requirement, reducing development time and costs, and providing known, reliable and safe systems. The simple configuration of a solid first stage and liquid second stage lowers the likelihood of failure and enables a flight path with total abort coverage, maximizing survival for the crew in the unlikely event of an anomaly requiring an abort. In addition, the Liberty spacecraft leverages design work performed at NASA Langley Research Center on the composite crew module and launch abort system, for which ATK was a contractor.

Liberty has a robust and sustainable business case that will create and sustain thousands of jobs across the United States including Alabama, California, Colorado, Florida, Maryland, New York, Ohio, Texas, Utah, and Virginia. Its low remaining development cost accelerates the time to market, filling NASA's requirements, and provides a quicker return on investment to outside entities. Liberty's performance of 44,500 pounds to low-earth orbit enables the system to launch both crew and cargo and also serve non-crewed markets including ISS cargo up and down mass, commercial space station servicing, U.S. government satellite launch, and future endeavors.

The Liberty spacecraft includes a composite crew module, which ATK built at its Iuka, Mississippi, facility as part of a NASA risk-reduction program at Langley between 2007 and 2010. As prime contractor, ATK is responsible for the composite crew module, Max Launch Abort System (MLAS), first stage, system integration and ground and mission operations, while Astrium provides the second stage powered by the Vulcain 2 engine and Lockheed Martin provides subsystems and other support.

The program has optimized and streamlined development, fabrication and mission operations while ensuring the utmost safety to support a commercial marketplace. Liberty also builds upon processes from existing ATK, Astrium and Lockheed Martin commercial programs. ATK's commercial programs include solid rocket motors for various launch vehicles, system integration and composite technology (for crew module, Delta IV, Atlas V and A350 Airbus composite structures) and other commercial products. Astrium builds the Ariane 5, which launches the majority of the world's commercial satellites and is afforded the lowest insurance rates based on its successful track record. Lockheed Martin commercial programs include satellites, the Atlas V and Athena launch vehicles. 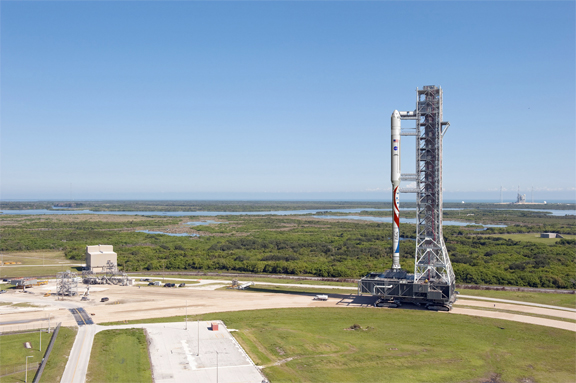 The new Liberty launch vehicle will use existing infrastructure at Kennedy Space Center. Illustration is courtesy of ATK

Liberty has been developed under a CCDEV-2 unfunded Space Act Agreement (SAA) with the NASA Commercial program office at the Kennedy Space Center. All development to date has been performed on internal funding from ATK and Astrium. Under this SAA, the team has successfully completed four milestones. The next major milestone is a structural test of the second stage tank, to be conducted at Astrium in June. The Liberty team will be working with NASA centers to further leverage lessons learned, engineering expertise test, launch facilities and mission operations, including Kennedy, Johnson, Marshall, Langley, Glenn, Ames and Stennis.