[SatNews] Bulky present generation satellite dishes and ground terminals could become relics of the past thanks to research currently being conducted for the European Space Agency (ESA) by Queen's University Belfast's Institute of Electronics, Communications and Information Technology (ECIT) aimed at developing discrete self-aligning flat antennas. 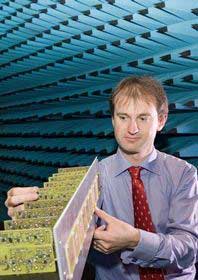 Dr. Neil Buchanan with a prototype of one of the QUB Retrodirective antennas.
It is hoped the work could lead to a one-size-fits all solution that could be optimised for a variety of technologies presently used to deliver satellite broadband and television to travellers as well as customers in broadband 'not spots'. ECIT is currently working on an 18 month ESA project with the aim of developing a completely self-contained solid-state self-steering antenna that is much lighter and less power hungry than current alternatives. The team being led by Professor Vincent Fusco plan to complete work on a 1.6GHz demonstrator - capable of providing transfer rates of 0.5Mbits/s - with a power requirement of just 2 watts. It is anticipated that the device will ultimately have the capability to operate at 20-30 GHz in order to provide much greater bandwidth.The design currently being worked on is a 4x5 element planar array measuring 30cm by 40 cm and just 12 mm deep.Uniquely, the circuits are entirely analogue and incorporate specially adapted phase locked loop circuits. By contrast, conventional circuits convert incoming signals to digital, process them electronically and then convert them back to analogue. This however limits their frequency, and increases their complexity, cost and power requirements.

Queen's University has a strong reputation in this specialised field, having built the world's first 65MHz self steered antenna a number of years ago. Since then, it has built a close relationship with ESA to whom it is now the main supplier of quasi-optical filters. Dr. Buchanan the lead engineer on the project who recently received ESA's Best Young Engineer award for his work in the field said, "The work is especially exciting because it has involved taking a piece of pure university research and bringing it into the real world. We believe that self-tracking antennas offer the prospect of much simpler and more cost effective alternatives to other current approaches. That, we believe, makes them ideally suited to a variety of end uses. For example, satellite broadband aircraft antennas are extremely complex. They need to be linked into the plane's onboard navigation system in order to find the satellite. In trains and road vehicles, they consume a lot of power and they require mechanical parts for tracking purposes. We believe that across these applications the solution we are currently working on could reduce power consumption by a factor of 10, weight by a factor of five and cost by a factor of four. It clearly has a lot of potential."