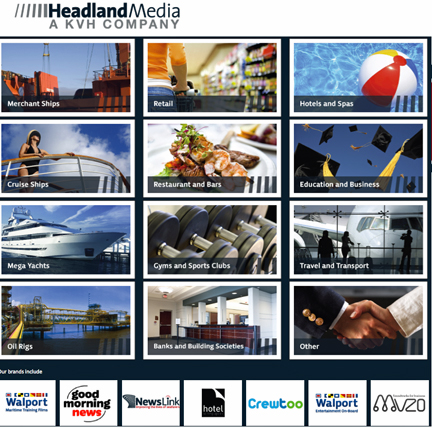 To learn more about Headland Media, please select this direct link to their infosite.
[SatNews] KVH Industries, Inc., (Nasdaq:KVHI) is supporting the International Seafarers' Welfare and Assistance Network (ISWAN) as sponsor of a London event this Thursday evening...

"Michael Grey, MBE, in Conversation with Rose George." George is the author of the acclaimed book, "Deep Sea and Foreign Going: Inside Shipping, the Invisible Industry that Brings You 90% of Everything," published in September of 2013. Grey is a lecturer and former ship master who received the MBE in 2000 for services to maritime safety.

The private ISWAN event on November 21 will take place in an appropriately maritime venue: The Ward Room of the HMS "President", a former Royal Navy warship docked in London and converted to a club and event space.

Book author Rose George spent five weeks on a containership while researching "Deep Sea and Foreign Going", which describes the challenging working conditions onboard commercial ships. Her book has received attention both inside and outside the shipping industry for raising awareness of seafarers' welfare.

KVH's NewsLink™ digital newspapers and Crewtoo® social media network, which are based in Liverpool, are leading providers of maritime crew welfare services. NewsLink and Crewtoo were formerly part of Headland Media, which was acquired by KVH Industries earlier this year. Headland Media is now called KVH Media Group. KVH Industries, Inc., has global headquarters in the United States.

ISWAN, a U.K.-based organisation dedicated to promoting the welfare of mariners and the implementation of the Maritime Labour Convention (MLC) 2006 mandating crew welfare benefits, aims to use the event to highlight its objectives and examine the welfare issues facing crew.