[SatNews] Spanish satellite communications operator HISPASAT held the awards ceremony for its Prize for the Best Telecommunications Satellite Innovation Project, at its headquarters in Madrid—the ceremony was presided over by Secretary General of Industry Begoña Cristeto. 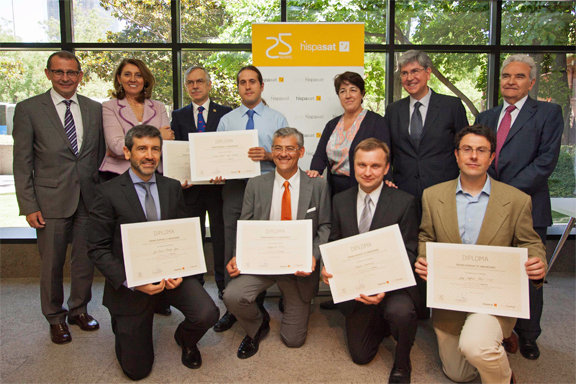 In her remarks, HISPASAT president Elena Pisonero highlighted the fact that “by awarding this prize, the company once again confirms its calling to be a driving force behind the Spanish aerospace industry, and to promote innovation and new developments that stand apart, have a clear positive impact on the satellite sector and position us as leaders of the market.”
Pisonero offered a brief overview of the past 25 years in HISPASAT’s history, and concluded that “we have a promising future before us, but a demanding one as well. Over the next 25 years we will have to promote innovative developments that respond to a permanently evolving demand.”

According to the company’s president, HISPASAT “has always maintained a constant dedication to innovation and a commitment to the Spanish aerospace industry. These are two elements that, in light of the results of this 25th Anniversary Prize, remain in full force.”

The event was attended by important figures from the telecommunications sector and the industry, in addition to the members of the jury of experts, who issued their decision this past May. This ceremony is the successful culmination of the series of activities scheduled by HISPASAT to mark the company's 25th anniversary.