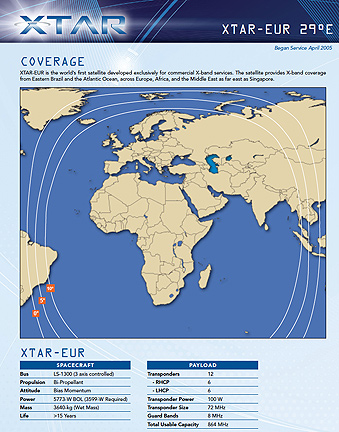 XTAR, LLC, has been awarded a bandwidth contract from Intelsat General Corporation. The multi-million dollar contract calls for XTAR to provide Intelsat General with 79.5 MHz of high power X-band services from its XTAR-EUR satellite which sits over the Middle East and Europe. The capacity will be employed in support of critical, time-sensitive data and communications between Afghanistan and Europe. The contract continues the relationship between XTAR and Intelsat General, enabling them to provide high-power, commercially available X-band capacity to under-served users. It is a renewal of the first Intelsat General contract which XTAR was awarded in 2010. The two companies may expand this contract in the next 12 months through two possible options for another 79.5 MHz.

XTAR-EUR, located at 29 degrees East, entered service in April 2005. It carries 12 100W wideband X-band transponders in both right- and left-hand circular polarization. This extremely flexible payload makes it ideal for X-band services from Eastern Brazil and the Atlantic Ocean, across Europe, Africa, the Middle East, and South East Asia. The satellite covers a large geographic area with its two global beams, one fixed and four steerable beams that can be repointed within the satellite’s coverage area. This flexibility, combined with coverage of Africa and North- and South America by XTAR’s second payload, XTAR-LANT, adds tremendous capabilities for government and military users across most of the globe.