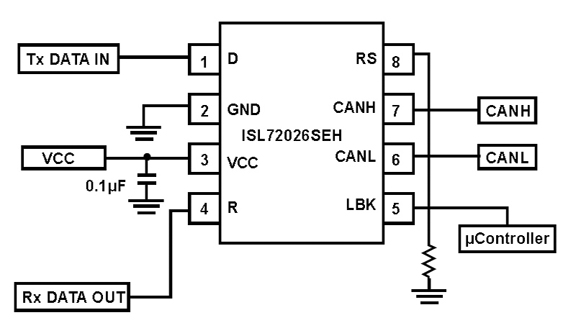 The radiation-tolerant 3.3-volt CAN bus transceivers are QML-V qualified and compliant with the ISO11898-2 physical layer standard. The devices provide serial data transmission between a CAN controller and CAN bus at speeds to 1 megabit per second. Systems designers can connect as many as 120 of Intersil's ISL7202xSEH transceivers to one CAN bus to reduce cabling and harness size, weight, and power (SWAP).

With the emergence of all-electric propulsion satellites that make the most of payload but take longer to reach final orbit, customers require higher total dose testing for mission assurance. Intersil's CAN transceivers are low dose rate tested as much as 75 kilorads on a wafer-by-wafer basis, and apply single event transient (SET) mitigation techniques to reduce system level bit error rates.