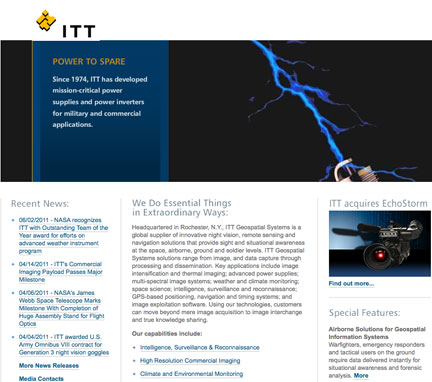 Link to ITT's Geospatial infopage
[SatNews] Exemplary efforts and team commitment to excellence has been rewarded...

ITT Corporation (NYSE: ITT) has been recognized by NASA with an Outstanding Team of the Year award for its superior efforts and commitment to excellence in building one of the world's most advanced weather instruments — the Advanced Baseline Imager (ABI). This satellite weather instrument is part of the Geostationary Operational Environmental Satellite R-Series (GOES-R) program. The exceptional performance of ITT's ABI team, and in particular, the employees who tested the prototype model, was cited by NASA in the award presentation. ITT is building the ABI instrument under contract to NASA and the National Oceanic and Atmospheric Administration (NOAA) for the next generation of the GOES-R program.

ABI will monitor and measure three times the number of atmospheric conditions currently measured and will provide enhanced images down to 1,000 meters. The instrument will also make severe weather data and images available to weather forecasters every 30 seconds rather than the current rate of every 7.5 minutes, and full-earth images in five minutes rather than the current rate of 30 minutes. These advancements will provide more accurate and localized forecasts, thereby improving predictions of a storm's development, path, and intensity. Overall, the GOES-R program is NOAA's next generation of geostationary weather satellites that are located 22,300 miles above the Earth, providing meteorological and environmental data and images used in weather forecasting. These satellites are critical to monitoring severe weather, such as tornadoes and hurricanes, and are best known as providing many of the images seen on local television weather reports in the U.S. ITT has built every imager and sounder for NOAA's GOES satellites since 1994, and was awarded the contract to build ABI in 2004. The GOES-R satellite is expected to launch in late 2015.