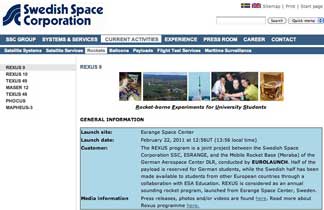 [SatNews] Today at 12:50 local time the student rocket REXUS 9 took aloft from Esrange Space Center in the northern part of Sweden. The rocket, with its four experiments, reached an altitude of 80.6 km and landed after 11 minutes flight 40 km north of Esrange. The recovery is ongoing and the payload will be back at the base for analysis within an hour.

The four experiments on board were testing new technical systems developed and built by students from universities all over Europe.

“The past week has been extremely intensive and very interesting, says Robert Wuseni from the REMOS team. From the data we received during the flight, it seems that our experiment behaved as predicted. This past year has been fantastic and will mean a lot for our coming careers”, Mr. Wuseni wraps up.