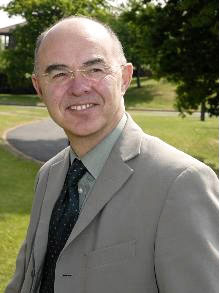 Sir Martin Sweeting
SSTL founder and Surrey Space Centre director Sir Martin Sweeting has received the Lifetime Achievement Award at the Elektra Electronics Industry Awards 2009. As a University graduate, Sir Martin challenged conventional space engineering by using commercially available electronics and parts to build small satellites.  After securing a "piggy back" launch for his first test satellite with NASA and launching several successful satellites under the University of Surrey, in 1985 Surrey Satellite Technology Ltd was formed to service the clear need for more affordable access to space throughout the World.

Sir Martin's vision is to change the economics of space.  His work and determination has enabled countries such as Algeria, Nigeria and Malaysia to establish rewarding space programs, developed a new market for small but advanced satellites, and provided more innovative and cost effective solutions for established space giants such as the United States, Russia, China and Europe. In 2005, the Galileo test satellite GIOVE-A encompassed Sir Martin's vision; its fresh approach delivering a vital European mission on-time and on budget to secure Europe's entry into global navigation and timing services. As a result, on the 7th January , SSTL captured its most significant contract, worth more than 200 million pounds from the European Commission to manufacture 14 Galileo satellite navigation payloads in partnership with German company OHB-System.

Sir Martin has plans — already under way — for SSTL and the Surrey Space Centre to take Britain to the Moon, the culmination of 10 year's work developing the scientific mission MoonLITE which plans to put satellite "orbiters" around the Moon carrying not only scientific instruments but also paving the way for commercial communications and navigation services for future manned lunar bases. As a leading authority on satellite technology recognised in NASA, ESA and around the world, Sir Martin is an avid supporter and ambassador of the industry.  He is also an active member of the Government's new Space Innovation and Growth Team (IGT) improving awareness and the promotion of skills and development to support the industry. In receiving the award, Sir Martin said "it is particularly gratifying to receive recognition from the electronics industry across Europe - it is their products that have enabled us to transform access to space."