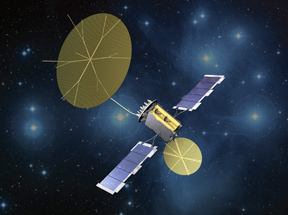 The MUOS satellite, developed for the U.S. Navy, leverages the latest commercial advances in cellular and satellite technology, while maintaining compatibility with legacy UHF systems. This is the first of five MUOS satellites scheduled for deployment. Each MUOS satellite will carry two Harris antenna reflectors—a 14m diameter unit for multiple-beam operation that significantly increases the number of users and traffic the system can support and a 5.4m diameter unit for legacy mission operations. The reflectors are secured to the satellite by precision booms that are also provided by Harris. A reflective gold mesh weave provides the reflective surface required for radio waves. In total, Harris is building ten units for the MUOS constellation, with the remaining eight units in varying stages of production. The antenna reflectors were manufactured at the company’s reflector manufacturing facility in Palm Bay, Florida.