GMV—EGNOS Brings Them In Safely (Satellite) 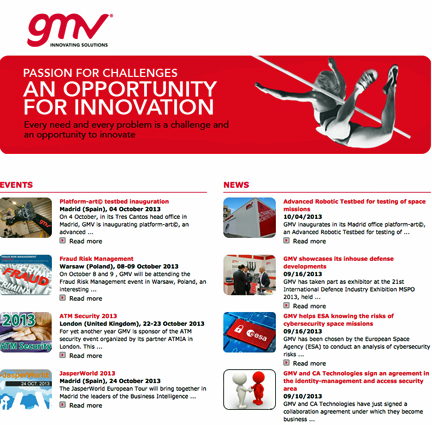 Santander airport (Parayas) became the first in Spain’s AENA network (Air Navigation and Airports Authority) authorized to use the European satellite system EGNOS. For the first time ever in Spain, an aircraft fitted with the necessary technology will be able to land at an airport using the European satellite navigation system EGNOS. This represents a far-reaching advance in terms of safety, operability and cost-saving, especially for regional airlines and general aviation. 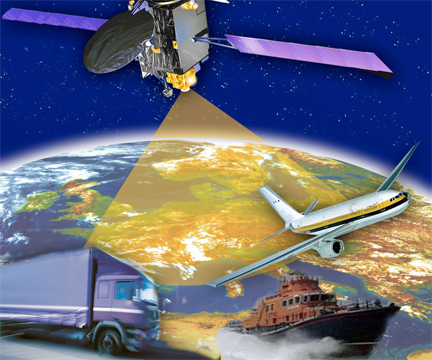 Artistic rendition of EGNOS in orbit managing communications.
The EGNOS Open Service came on stream in October 2009 for non risk-of-life applications such as personal navigation, goods tracking and precision agriculture. In March 2011, the European Commission declared the EGNOS Safety-of-Life service to be fit for use in civil aviation, kicking off a long period of spadework for preparing the operational environment, mainly the design of instrumental approach procedures, test flights and analysis of operational safety.

EGNOS is a satellite based augmentation system (SBAS) that improves the precision and integrity of Europe’s satellite-navigation signals. The system is based on a series of transponders installed on three geostationary satellites over the eastern part of the Atlantic Ocean and over Europe, linked up to a network of 40 ground stations and four control centers. This service guarantees that the signals meet the strict dependability requirements of the International Civil Aviation Organization (ICAO), adapted to Europe’s situation by Eurocontrol, the European Organization for the Safety of Air Navigation.

EGNOS provides the wherewithal for precise and safe guidance in approaches to small airports. Its roll-out will reduce delays, cancellations and rerouting of flights operating at these airports in low-visibility conditions, also enhancing passenger safety.

To be eligible for EGNOS use in airport approaches, air-navigation service providers (AENA, in Spain’s case) are bound to publish new instrumental approach procedures based on this system; aircraft have to be fitted with compatible receivers and operators have to receive the corresponding certification.   EGNOS has been developed through a 15-year-long tripartite agreement between the European Space Agency (ESA), the European Commission and Eurocontrol. As initial manager of the EGNOS program, ESA designed, certified and contracted the development of the system from an industrial consortium led by Thales Alenia Space France, with strong participation by Spanish industry, GMV to the fore. Management of the program switched over to the European Commission in 2009. The European Satellite Services Provider (ESSP), based in Toulouse, France, supervises day-to-day system operation.

GMV has played a key role right from the start of the EGNOS program, participating actively in the phases of system design and definition. GMV’s main contribution to the EGNOS system has been development of the EGNOS Central Processing Facility Processing Set (CPFPS), often dubbed the “heart” of the EGNOS System since it calculates all the corrections to be sent to users, including the integrity message. GMV has also played an active part in the development of test beds (System Test Bed), simulators (EGNOS End to End Simulator), analysis and monitoring tools and system qualification tools (such as ASQF- Application Specific Qualification Facility), plus a great number of auxiliary activities.

In early September the State Air-Safety Agency (Agencia Estatal de Seguridad Aérea: AESA) gave the go-ahead for commencement of operations under the EGNOS system from Santander Airport as from 17 October. It is also scheduled to be fitted in the airports of Almería, Valencia and Seville in the first half of 2014.