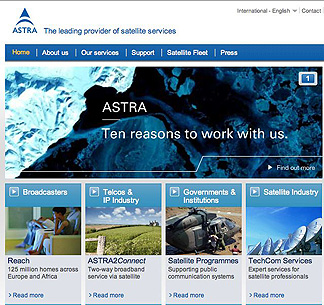 Satellite BG will launch its channel bouquet on 1 February 2011. The offer will consist of more than 70 channels including High Definition (HD) channels and all major public and commercial channels in Bulgaria. TV viewers wishing to receive Satellite BG will need a satellite dish pointed to 23.5 degrees East and a satellite receiver with a suitable smartcard and subscription.

Norbert Hölzle, Chief Commercial Officer of SES ASTRA, said: “This agreement is our entry into the Bulgarian market. Satellite BG is an important new customer who will help us to open up the Bulgarian market for our products and services. This agreement demonstrates that ASTRA’s 23.5 degrees East orbital position is one of the most attractive hot spots for the whole region, enabling us to further extend our reach and develop our offer.”

Stefan Bonev, Chief Operating Officer of Satellite BG, said: “We are very pleased to have entered into this strategic partnership with SES ASTRA. Satellite BG is a new Direct-to-Home operator with the aim of establishing itself as market leader in HD and 3D television in Bulgaria. We have chosen to work with SES ASTRA due to its technical experience and the fast development and optimal coverage of its 23.5 degrees East orbital position.”