Japan... No Damage To Spacecraft 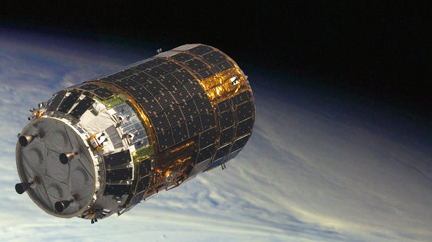 The HTV-3 unmanned spacecraft
[SatNews] No damage has been reported to three of Japan's yet-to-be-launched spacecraft.

Japan's HTV-3 space freighter and two satellites were not damaged in the 9.0-magnitude earthquake and tsunami, the Spaceflight Now portal reported, citing space industry officials. HTV-3, an unmanned spacecraft scheduled to deliver supplies to the International Space Station in January 2012, was "safe" following the earthquake, an official said. The cargo spacecraft was housed at a Mitsubishi Heavy Industries Ltd. facility in the city of Nagoya southwest of Tokyo, away from the worst-affected areas.

The GCOM-W1 meteorological satellite, owned by Japan Aerospace Exploration Agency (JAXA) also survived the earthquake, though some parts of the Tsukuba Space Center where it was undergoing tests were damaged when the disaster struck. The launch of the spacecraft, scheduled for this November, may be reviewed as tests are currently behind schedule. Another satellite, the Mitsubishi Electric Corporation's ST-2 communications satellite, was also "unscathed" in the quake, the website said. The craft is being prepared for transportation to the Ariane 5 rocket launch site in South America.