[SatNews] The crisp early morning of October 11th saw a number of hot air balloons in the sky...

...above Colorado Springs Airport. However, one balloon had a particular mission and stood out from the rest. The launch was brief to the casual observer, but was part of a demonstration of the Combat SkySat military retransmission platform for members of the U.S. Army Space and Missile Defense Command/Army Forces Strategic Command. The event included a briefing by members of the command's Future Warfare Center and Battle Lab to senior Space and Missile Defense Command, or SMDC, leadership on the Combat SkySat system, its capabilities, and how it can be applied to the Army mission. 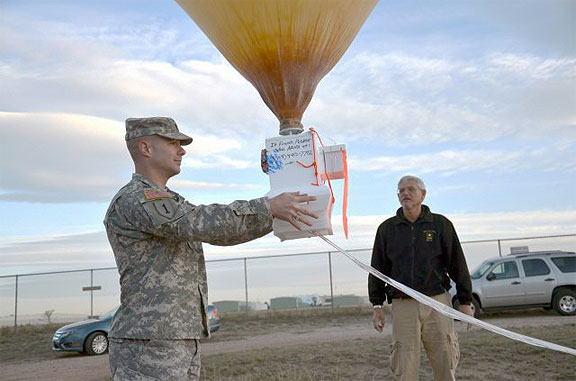 After questions and a close examination of a sister system—the Combat SkySat Tethered system—on display inside a warehouse, the group moved outside and at 7:31 a.m., Capt. Joseph Mroszczyk, space and missile defense officer, from the Training and Doctrine Command capabilities manager for space and global missile defense, assisted in the release of the balloon carrying a communications payload and power supply. According to Battle Lab officials, the balloon and its payload reached an altitude of 30,000 feet and was brought down after 30 minutes aloft (the system is designed to stay up for 12 hours.) The balloon and its package came down safely 62 miles east of Colorado Springs.

As part of the demonstration, a second balloon was launched earlier that morning from the Comanche National Grasslands in south central Colorado. Its purpose was to demonstrate the communications capability by providing a communications relay with the group observing the demonstration launch in Colorado Springs. Officials stated it reached an elevation of 80,000 feet in one hour and 20 minutes. "From that altitude, we communicated from here with the launch team 150 miles away, using a standard PRC 148 hand-held radio with standard antenna," said Mary Miller, chief, operations division, Battle Lab, and one of the action officers for this event. SMDC leadership reaction was extremely positive, according to Miller. (Source: DJ Montoya, Public Affairs SMDC/ARSTRAT Ops) 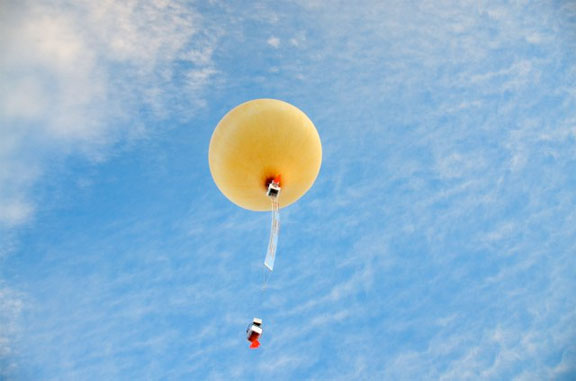