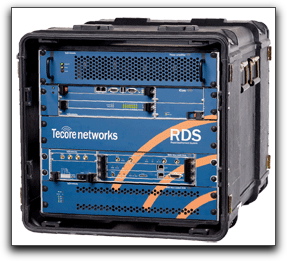 MilSec-RDS is a complete, transportable network fully compliant with major wireless standards such as GSM, CDMA and UMTS, fortified with features to satisfy military requirements.  Although networks and devices based on the next generation of wireless technology — known as 4G LTE — are not expected to be widely available until 2011, Tecore recognizes the need for the armed forces to be prepared in advance, and has augmented MilSec-RDS with the capability to be upgraded to LTE. The system enables Type 1-4 encrypted calls, as well as Multi-Level Precedence and Preemption (MLPP), which extends the prioritization capabilities of a government private network to the wireless segment.  With the optional addition of iNAC, the system operator can control wireless communications in the surrounding area, whether on commercial or private networks.  Devices in the area are forced to register with the MilSec-RDS, and can be permitted or denied to complete voice, text or data communications.  Unwanted and potentially dangerous devices are barred from service without impact to authorized, mission-critical ones.

MilSec-RDS is a complete, multi-technology all-IP network including core, radio access and backhaul, which has passed the requirements of the Department of Defense Interoperability Communication Exercise (DICE).  The baseline system supports standalone and centralized operations, and multiple units can mesh together in the field to dynamically form a multi-site secured communications infrastructure. Executives of Tecore Networks will showcase MilSec-RDS at MILCOM, Booth #457 from October 18 to 21, 2009 at the World Trade Center in Boston, Massachusetts.